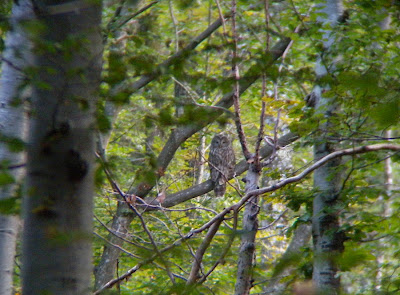 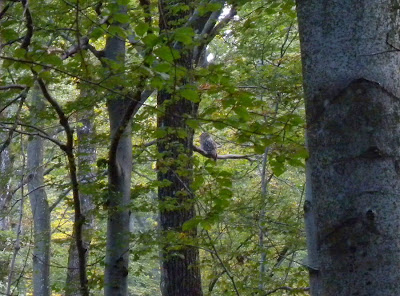 Struck gold once again during one of my afternoon strolls. In a mixed oak-beech forest on the Slovenian Karst I stumbled across a pair of URAL OWLS Strix uralensis in complete daylight! While I was taking flower pics, my attention was caught by a singing female. I looked around and found it sat in full view some 50 metres away from me on a beech branch. Seconds of shock! It soon flew off, so I followed the bird and re-found it, perched again in full view. But most surprisingly, minutes later it was joined by a male and both were then perched nearby (also same field of view!). They even sang a short duet. I followed the movements of the female for some 20 minutes or more and had great views of it. It didn't seem too disturbed by my presence. The above shots were taken with camera held on bins - a real challenge with adrenaline in the veins! The show came to an end when first the male and then the female flew out of view, followed by noisy Jays Garrulus glandarius.
In my personal opinion this is a really interesting find. Ural Owls are widespread in the Dinaric forests (from Snežnik to Trnovski gozd), but less so in other parts of the country, especially the Karst, where they are occasional vagrants (not breeders). As these two birds seemed a pair I'll have to check next spring for a potential breeding.
Supporting cast in the forest was mainly woodpecker-based: Grey-headed Picus canus (a vocal pair, male seen well), Green Picus viridis (1), Black Dryocopus martius (2 - one even drumming), Lesser Spotted Dendrocopos minor (1) and Great Spotted Dendrocopos major (2-3).

Otherwise still many summer migrants around. Today I heard several Willow Warblers Phylloscopus trochilus on passage, seen 2 Red-backed Shrikes Lanius collurio (despite the fact I went out looking for the first Great Greys) and Wheatears Oenanthe oenanthe.
Yesterday my garden held a Common Redstart Phoenicurus phoenicurus (female), a Garden Warbler Sylvia borin and a Lesser Whiethroat Sylvia curruca.
This morning also the first flock of 50 Woodpigeons Columba palumbus on migration over the patch.
Posted by Domen & Sara at 13:50