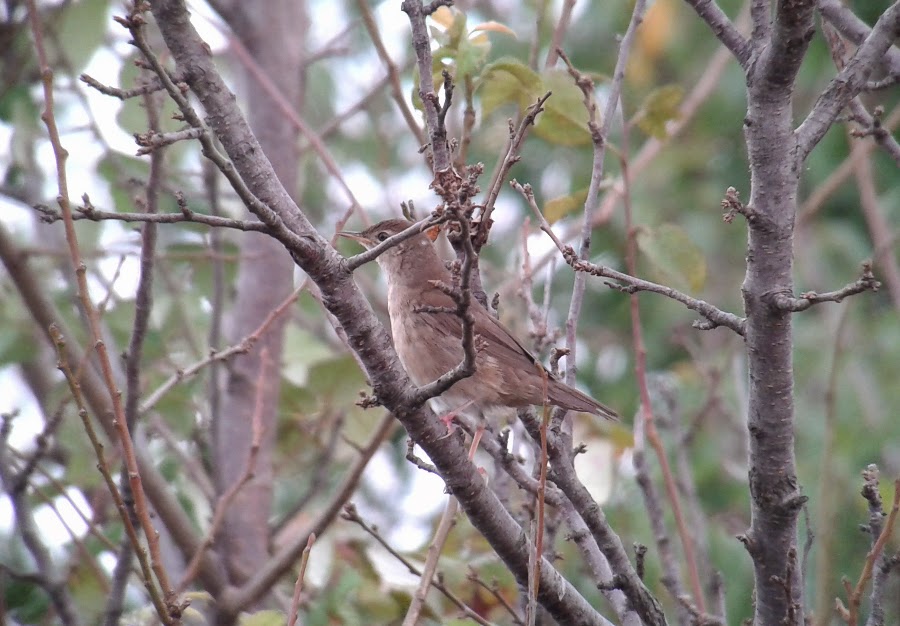 Škocjanski zatok NR: today's morning at the reserve for the weekly monitoring was lightened up by the above SAVI'S WARBLER Locustella luscinioides. Quite showy bird, perched on a bush by the path and even allowing some quick phone-scoping documentation. This is the first Savi's I see properly outside my Hungary trip in 2011 and also my first in Škocjanski zatok. The timing of this observation coincides well with the migration of Locustellas - from the reserve I have two consecutive observations of Grasshopper Warbler at this time of year.
The weather today was excellent for migrants, but the situation was quieter than expected. Nevertheless some birds were more noteworthy than others: Black-necked Grebe Podiceps nigricollis (8 in the lagoon - record number?), Little Stint Calidris minuta (1), Wheatear Oenanthe oenanthe (3), Whinchat Saxicola rubetra (5) and Meadow Pipit Anthus pratensis (29). Very few waders around (due to high water levels), but 6 Curlews Numenius arquata and 3 Snipes Gallinago gallinago were nice to see on the grass in the freshwater marsh ("winter mode").

Local patch: today the skies were literally full of House Martins Delichon urbicum (+500) with a couple of Swallows Hirundo rustica mixed among them. Also a few Common Swifts Apus apus and at least 20 Alpine Swifts Apus melba. Something like 1000 birds or more in the sky. The strong overcast conditions and a bit of fog kept the birds around for most of the day.
Ooh, the wonders of migration!
Posted by Domen & Sara at 11:01