Approaching the end of winter 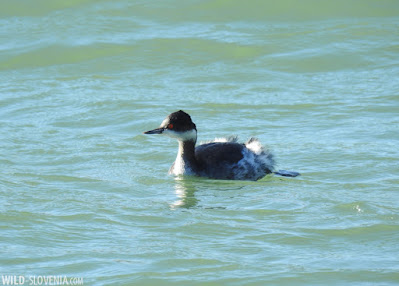 Blogging has been very slow lately, partly because of work and other commitments and partly because of the season's typical "wildlife emptiness". Field activity has been reduced to a minimum also because of the poor weather, although there were the "usual circuits" we've been still working regularly, including Škocjanski zatok and the Karst around home. However we will begin this post with something more "exotic". Last weekend we descended from the cold and wind-swept Karst and went looking for some early spring signs in the Dragonja valley in Istria (close to the border with Croatia). We visited a nice little tributary of the river Dragonja, with a rather famous waterfall, where Maidenhair Fern Adiantum capillus-veneris grows. In Slovenia this Mediterranean species of fern is scarce and localised to the warmer areas of the Primorska region, where it grows on wet travertine rocks. Istria is the best place to see this interesting plant, although we also have a relict location in the Karst at Škocjanske jame (Škocjan caves), where it grows alongside alpine species such as Bear's Ear Primula auricula. Along the little stream and right under the waterfall we admired good numbers of the fern, although not all the plants have sprouted their fresh stems yet. Given the very low temperatures of the past days, some of the plants were ice-covered - something which is probably not very common to observe in this Mediterranean species. The first tiny blooms of Cornelian Cherry Cornus mas and several Primroses Primula vulgaris cheered us up a bit... but not too much (as true spring is not that near after all). Further downstream along the river Dragonja we came across another rare Mediterranean plant (although very common in Croatia), the Prickly Juniper Juniperus oxycedrus, the red-berried cousin of the more widespread Common Juniper Juniperus communis. 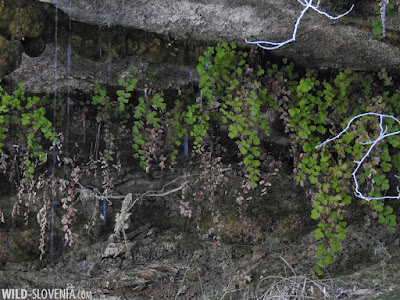 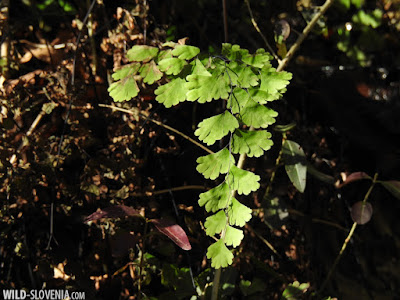 Moving downstream the Dragonja valley we decided to take a look at the Sečovlje salinas (saltworks), an area rich with birds that we visit only occasionally. The long walk along the final part of the Dragonja and down to its estuary produced the expected mix of common waterbirds, including lots of Shelducks Tadorna tadorna, several Common Sandpipers Actitis hypoleucos, a Marsh Harrier Circus aeruginosus, singing Water Rail Rallus aquaticus, a Pygmy Cormorant Microcarbo pygmaeus and others. More interesting was the sea where we found a group of 4 Slavonian Grebes Podiceps auritus, a Black-throated Diver Gavia arctica and good numbers of Red-breasted Mergansers Mergus serrator and Black-necked Grebes Podiceps nigricollis - all typical winter visitors in the Adriatic. In the late afternoon we scanned the ruins of the old saltworker's houses and spotted no less than 3 Little Owls Athene noctua. It is always a pleasure to find and observe this rather scarce species in Slovenia, nowadays almost confined to the very western part of the country. 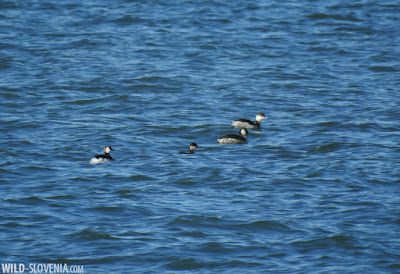 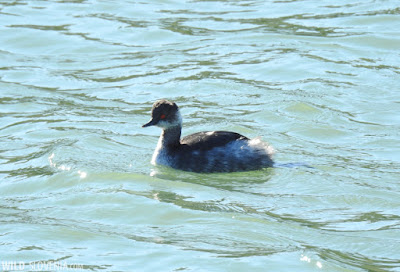 If there's one thing that hardly changes throughout the year (regardless of outside events) and dictates the tempo of the seasons is the regular weekly bird monitoring at Škocjanski zatok. Although waterbird numbers are the highest in winter, this season brings little variety of species and therefore little entertainment. However, in the course of the past month we managed to gather several (locally) interesting sightings. Perhaps best of all was a flock of 298 Lapwings Vanellus vanellus stopping at the wetland during their northward migration, which represented the highest count for this species at the reserve. Hidden among Lapwings were also two Golden Plovers Pluvialis apricaria (a rare species at the reserve). Among all the common dabbling ducks that regularly occur at Škocjanski zatok, the rarest is, inexplicably, the Pintail Anas acuta. We are therefore always happy when we find this species, like we did recently, when a group of 7 was resting in the lagoon. Other interesting/unusual species observed in the past month included Spotted Redshank Tringa erythropus and Fieldfare Turdus pilaris, but for more you should check Škocjanski zatok's FB page (& website) where you can follow the regular updates, with almost-complete check-lists uploaded on a weekly basis. Also, this week the reserve has re-opened to the public after the lockdown, so you're welcome to visit! 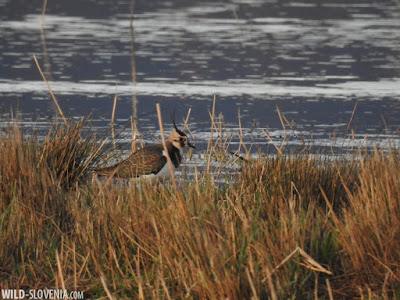 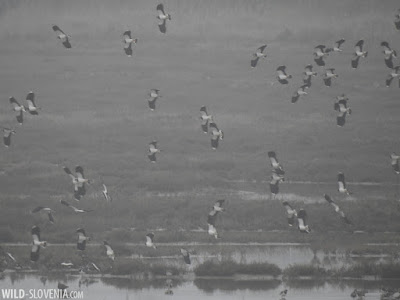 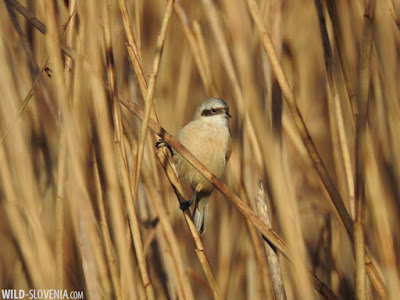 To round up the post we'll also mention some of the interesting sightings from our local area in the Karst. Although the landscape is still very much wintry, woodpeckers are beginning to be very active in the woodlands, while also Eagle Owls Bubo bubo have started to advertise their territory on several locations not far from home. Our short wanderings around the Karst have mostly included scouting for new locations (searching for nests, territories ect.) as well as admiring the local hydrogeological features of this extremely interesting area. Smartworking has also enabled us to do some regular office birding, livening up those dark rainy and cold days in front of the pc. A relatively large flock of around 60 Siskins Spinus spinus has been present at our feeders recently, similarly to the Hawfinches we had last year at the end of winter. Sparrowhawks Accipiter nisus also make regular incursions into the garden but only seldom pose well like in the below photos. On calm evenings the first migrant Mute Swans Cygnus olor are visible overhead and will be soon followed by the late winter flow of geese, ducks and Cranes Grus grus moving north to their breeding grounds. Needles to say, we are eagerly waiting to see what the start of the spring season will bring! 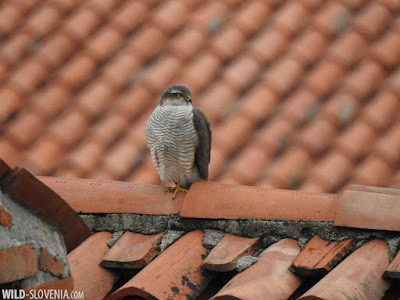 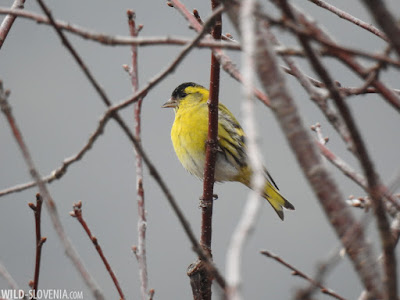 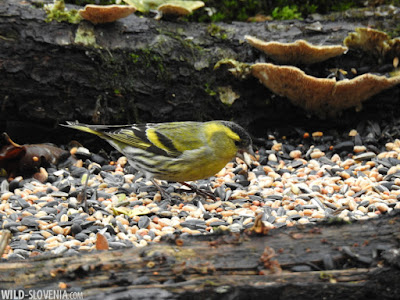 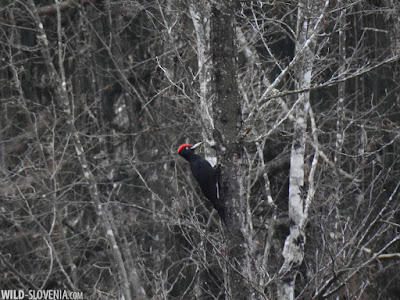 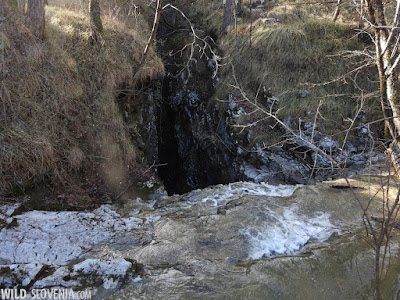 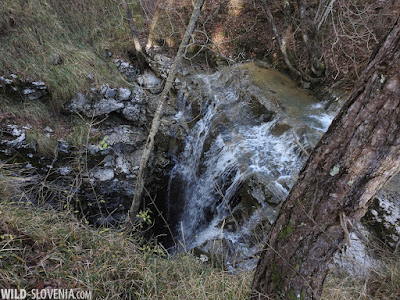