The angel duck from the north 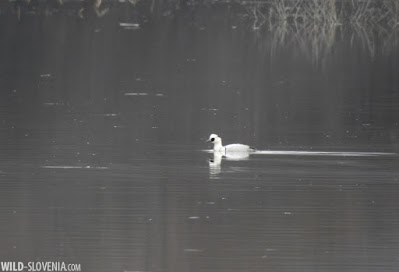 It is frequently the case that the year's first visit of lake Cerknica in January delivers some typical cold-season birds that we don't usually see in western Slovenia until the turn of the new year. One such bird is the attractive Smew Mergellus albellus, an increasingly scarce wintering duck in Slovenia. The only area where it occurs every winter in some numbers is the Drava river basin, while lake Cerknica usually holds only a few individuals in recent years (although we remember seeing flocks of up to 10 birds about a decade ago). Needless to say it is always good to come across one, even if intentionally, like a few days ago, when we wanted to check the lake specifically to find this species. And we quite successfully did so, as Smews at lake Cerknica seem to like always a particular spot. However they are not easy to approach as they tend to be rather shy and flighty, as our poor images usually illustrate. The drake we found, possibly the same individual wintering on the lake last year, was mostly alone, only occasionally mixing with some Mallards and following a small group of Goldeneyes Bucephala clangula. The latter, also a regular species at the lake, numbered only 7 individuals, although we must have missed a few more (flocks of up to 20 or more are the norm here). Among other wildfowl we also saw a few Tufted Ducks Aythya fuligula, but didn't actually check the larger flock of ducks present at the lake, as the rain caught us on the way.
Another typical winter species we are not used to see very often (at least not in recent years) is the Common Gull Larus canus, which is far from common in Slovenia! We were greeted by a flock of 14 resting on the lake, however again, winters ago we remember seeing flocks of up to 200 on the lake. The species seems to be more abundant at the end of winter, in March, when larger flocks pass through Slovenia on their way north. Winter visits to Cerknica often repay the observer with sights of the majestic White-tailed Eagles Haliaeetus albicilla. This time we didn't see just the two (probably local) adults resting on the lake, but also an immature, possibly a wintering bird from northern Europe? On the forest edge several birds were already in spring mode: 3 Grey-headed Woodpeckers Picus canus were calling to each other, a Great Spotted Woodpecker Dendrocopos major was drumming insistently, while Goldcrests Regulus regulus, Coal Tits Periparus ater and Great Tits Parus major were happily singing. Other birds around also included a small flock of Fieldfares Turdus pilaris, Mistle Thrush Turdus viscivorus, Crested Tit Lophophanes cristatus, Crossbill Loxia curvirostra and a Great Grey Shrike Lanius excubitor. All in all a short but very productive winter morning.