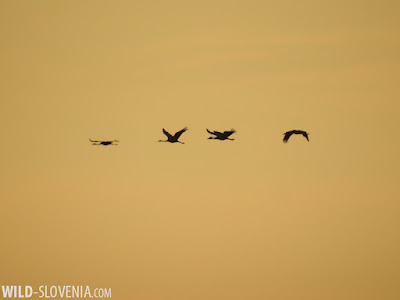 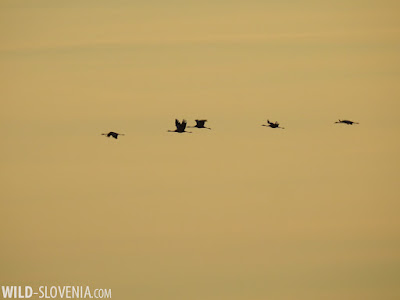 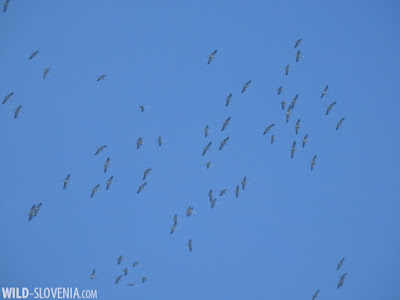 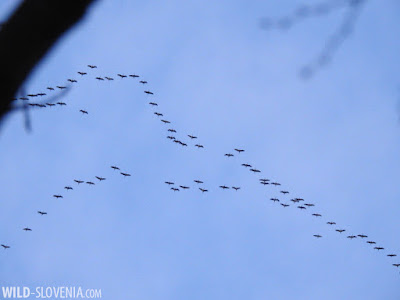 Since the end of February, when we returned from Spain, we've been in the field mostly for work (at Škocjanski zatok) and not doing much else, apart from checking Eagle Owl territories in the evenings. Nevertheless we managed to catch up with the migration of Common Cranes Grus grus several times. Nowadays it is relatively easy to predict the passage of these mighty birds, mostly migrating north-eastwards over our region during sunny days with clear skies, from the end of February to the beginning of March. Flocks of several hundred birds are now the norm, although until a few decades ago, Cranes used to be rare visitors to our latitudes. Last week we observed a large flock of almost 300 birds over Škocjanski zatok, then 11 over Divača, 5 above the sea on the Gulf of Trieste and yesterday at least 200 over the Komen Karst. Recently we checked several territories of Eagle Owl Bubo bubo in the Karst, including our local pair, not far from where we live. It is an exciting time for the study of this species in Slovenia as several projects followed by our colleagues from BirdLife Slovenia are focused on this charismatic animal (this new website has been recently launched). We also have some fresh news to report on the matter, but we'll probably do so in one of the next posts...
Meanwhile spring is advancing and the first migrants are reappearing. These days we sighted the first House Martins Delichon urbicum and Swallows Hirundo rustica of the season at Škocjanski zatok NR, as well as 3 Ruffs Philomachus pugnax and 2 Jack Snipes Lymnocryptes minimus (a difficult species to observe). In the deciduous woodlands of the Karst Middle Spotted Woodpeckers Dendrocopos medius as well as other Picids are becoming increasingly territorial and more noticeable. A pair of roding Woodcocks Scolopax rusticola in the Karst near Komen was also kind of exciting given the rarity of this species as a breeding bird in Slovenia (although it might also involve two birds on migration). Keep tuned for more spring action in the coming weeks!
Posted by Domen & Sara at 12:59