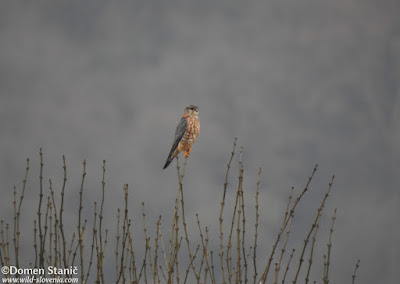 This weekend was time for some serious birding, so given the season, we headed to more productive areas, visiting our southern neighbours. The Istrian peninsula in nearby Croatia offers some excellent birding all-year-round, however we only visit it a couple of times a year. In winter, this sub-Mediterranean region is several degrees warmer than most of Slovenia. A lot of small birds, raptors and waterbirds congregate in the valley of the river Mirna and around its estuary by the Adriatic sea. And that was our destination for the day. As we arrived at the river's estuary, working the valley upstream, we first checked the sea. Among the many wintering Black-necked Grebes Podiceps nigricollis we also found their rarer cousin, a Slavonian Grebe Podiceps auritus, while a raft of about 10 Black-throated Divers Gavia arctica was also nearby.
The lagoon at the river's estuary was full of waterbirds, including good numbers of Wigeon Anas penelope and a small flock of Dunlins Calidris alpina.

Working the river valley upstream we were soon greeted by a pair of showy Little Owls Athene noctua, enjoying the weak morning sun on an old farmstead. It's always a pleasure to see this owl, which is quite rare and localised in Slovenia. 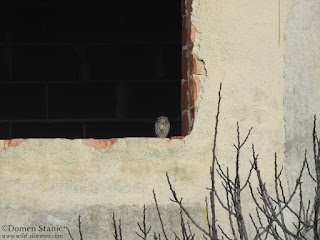 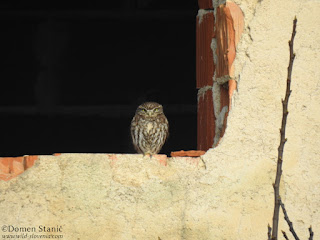 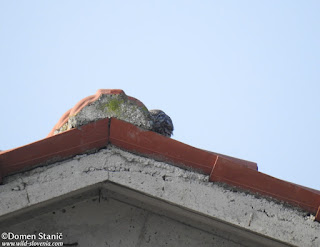 However the star of the day was a beautiful male Merlin Falco columbarius which allowed extremely good views while sitting on the trees along the river Mirna. We could also observe it hunting, sometimes along a female Hen Harrier Circus cyaneus that kept flushing small birds, while quartering the fields. This Merlin is most probably the same bird we already observed (and Paul too) in the last two winters, as it is very loyal to its perches and hunting area. The species is a rather scarce winter visitor and passage migrant to Slovenia that we don't get to observe very often. Therefore seeing a male such as this it's always very exciting... 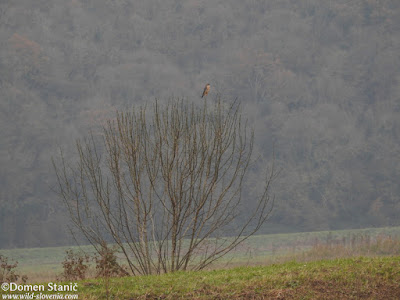 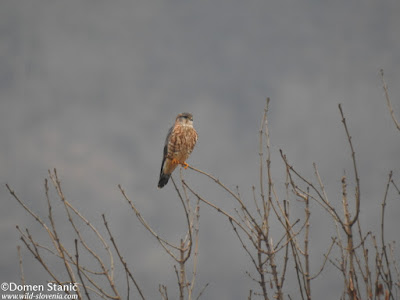 Many other small birds were around the farmlands of the Mirna valley, including several Great Grey Shrikes Lanius excubitor, flocks of Meadow Pipits Anthus pratensis, some Reed Buntings Emberiza schoeniclus, Stonechats Saxicola torquatus and plenty of other potential food for the Merlin.


In the afternoon, for a change of habitat, we stopped at Istarske Toplice, where we scanned the karstic limestone cliffs and found a Wallcreeper Tichodroma muraria, feeding in the cliff face above the hotel. On the way home we also checked some cliffs at the Karst edge in Slovenia, where in the evening, a singing duo of Eagle Owls Bubo bubo rounded up the day very nicely.
Posted by Domen & Sara at 13:43