Late autumn birding with Cranes on the move 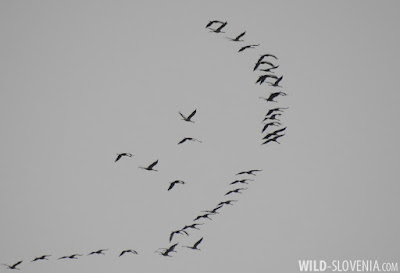 As the first spell of cold is upon us, the last flocks of Common Cranes Grus grus are passing through Slovenia in large numbers. The last couple of days have seen a good passage of large flocks heading south at traditional sites such as Ljubljansko barje (the capital's outskirts), Cerkniško jezero and others. Several flocks were also reported above the Karst and in the wider area around the Gulf of Trieste, so surely some birds should have been passing above our home too. And indeed, yesterday we enjoyed a large influx of Cranes directly from our garden! Between 12.50 and 13.20 several different skeins passed overhead, one after the other, for a total of slightly less than 900 birds. The loud calling of migrating cranes remains one of the highlights of bird migration at our latitudes! 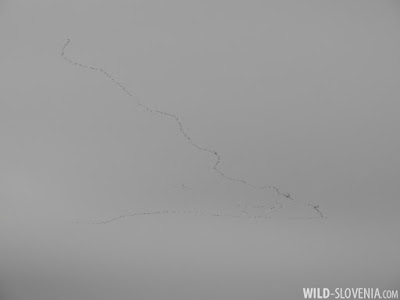 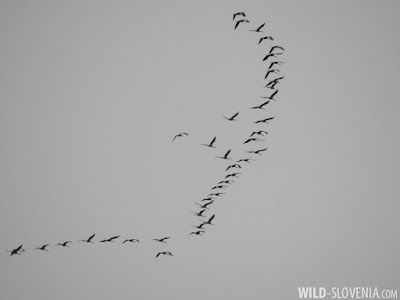 A recent visit to lake Cerknica, now filled with water due to the abundant rainfalls, produced the expected seasonal variety of waterbirds, including some rather interesting species for continental Slovenia. Among the typical winter visitors were small flocks of Goldeneyes Bucephala clangula and Tufted Ducks Aythya fuligula, with a variety of other common dabbling ducks. A large "raft" of 75 Shelducks Tadorna tadorna was something of a regional record, although we were even happier with some Little Gulls Hydrocoloeus minutus mixed within a flock fo Black-headed Gulls Chroicocephalus ridibundus. Interesting was also the presence of 6 Red-breasted Mergansers Mergus serrator, a common wintering bird on the sea, but rather scarce or locally rare inland. Among passerines a nice flock of 12 Redwings Turdus iliacus and a Great Grey Shrike Lanius excubitor were welcome sights.
After checking lake Cerknica we also made a brief visit to Planinsko polje, a large karstic floodplain (polje) which has actually turned into a lake. There were Shelducks here too (8 individuals) and several Mute Swans Cygnus olor, in places where in summer you'd usually expect to have wet meadows with Barred Warbler Sylvia nisoria, Quail Coturnix coturnix and Corncrake Crex crex. 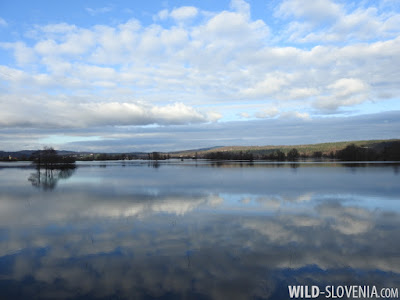 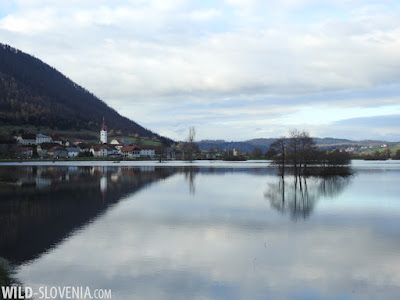 In the past week we've also seen a few interesting birds in the Karst. Sara was lucky to spot a Red Kite Milvus milvus (sort of a rarity in Slovenia) and a pair of Golden Eagles Aquila chrysaetos on the Karst edge near Rakitovec, while Domen had a nice Middle Spotted Woodpecker Dendrocopos medius and a Woodcock Scolopax rusticola in a woodland near Sežana. Several Bullfinches Pyrrhula pyrrhula were also seen or heard regularly (also in the garden), including at least some "trumpeting" Northern Bullfinches Pyrrhula pyrrhula ssp. pyrrhula. In our local woods we had the chance to enjoy the last autumn colours on the trees as well as some late species of fungi, closing the mushroom season. 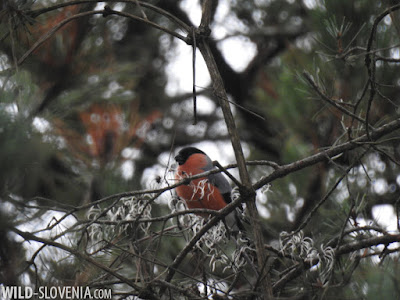 Škocjanski zatok nature reserve has also witnessed some interesting birds in the recent week. Highlights included: Red-throated Diver Gavia stellata (1 in flight), Ferruginous Duck Aythya nyroca (1 male), Pygmy Cormorant Phalacrocorax pygmeus (4), Cattle Egret Bubulcus ibis (up to 7), Greylag Goose Anser anser (17), White-fronted Goose Anser albifrons (2), Lapwing Vanellus vanellus (1), Peregrine Falco peregrinus (1) and Sardinian Warbler Sylvia melanocephala (1). The two long-stayers, Flamingo Phoenicopterus roseus and White Stork Ciconia ciconia are still present. The first Bittern Boaturus stellaris of the season has also been reported.
We also forgot to mention that about a month ago, during a spell of bad weather we observed a nice Jack Snipe Lymnocryptes minimus, feeding out in the open on a wet meadow. This is a scarce but annual passage migrant (and maybe overwinterer) at the reserve and it is only the second time we had the chance to observe it so well here.

We'll finish with a "trans-border" sighting from nearby Italy. Some days ago, while visiting a friend in Udine (a major town in NE Italy) we enjoyed great views a Little Owl Athene noctua from his house. Below is a phone-scoping documentation. These birds are common in the intensively farmed and heavily industrialised Friuli region, where they can be quite easily seen. On the other hand, the species somehow struggles to thrive over most of rural Slovenia, where it is a rather rare and localised breeding bird.