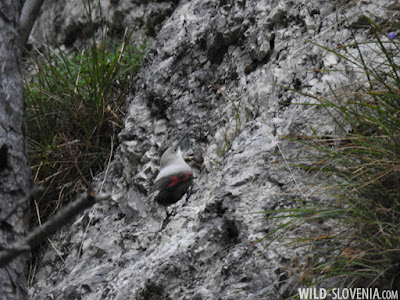 Last weekend we went walking in Trnovski gozd (the Trnovo forest) in western Slovenia, with the main intent to look for Three-toed Woodpecker Picoides tridactylus. We visited an extensive patch of conifer forest with old and decaying Norway spruces Picea abies, but without finding our target bird. Nevertheless we had a good time, enjoying the beautiful autumn colours of the beech Fagus sylvatica trees shedding their leaves. The forest was also full of fungi, although temperatures were a bit rigid and most birds remained skulking. Apart from Grey-headed Picus canus, Black Dryocopus martius and Lesser Spotted Woodpecker Dendrocopos minor, plus the usual mix of conifer forest birds, we didn't see any interesting species. Even the widespread Ural Owls Strix uralensis proved elusive and apparently didn't like the cold wind either. 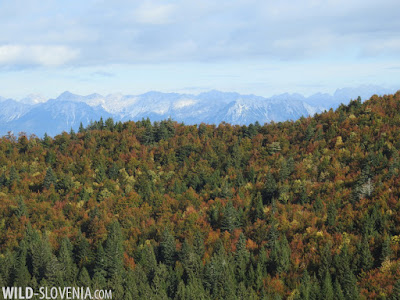 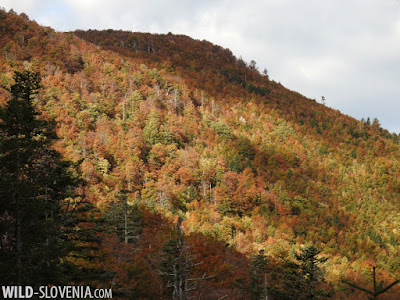 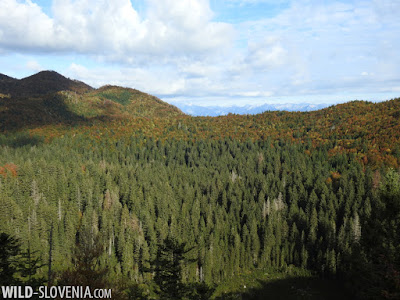 But birding surprises arrived at last, just as we were descending from the Trnovo plateau down to the Vipava valley. A quick look to the "eagle cliffs" revealed two Golden Eagles Aquila chrysaetos perched on a distant rock - most probably the local pair we regularly observe at this site. So far the best bird of the day!

However just a few minutes later our attention was caught by a small bird, fluttering around some roadside rocks. It was a beautiful Wallcreeper Tichodroma muraria - our first this autumn! The bird allowed very close views, although it was rather restless and flighty. On one occasion it also landed on and climbed a tree, a seldom observed behaviour. After a while it flew off and landed on some more distant rocks, where it started to work the cliffs upwards and disappeared from view. In early October the first wintering Wallcreepers appear at lower altitudes, after spending the breeding season in the Alps. The species is a rare breeder in the Julian & Kamnik-Savinja Alps and Karavanke mountains in northern Slovenia. In winter it is more easily observed on Karstic limestone cliffs of western and south-western Slovenia. But birds observed in early October are usually migrants that can stop at very unusual places like small roadside cliffs, heaps of rocks, buildings in mountain areas ect. It is possible that the individual we observed was one such migrant that won't actually spend the winter at the site. Proving this hypothesis is also the fact that we've never observed the species at this site before, although we visit on a regular basis.
These days other first-of-the-season Wallcreepers were reported by our colleagues, including Paul's bird on a building in Istria and this individual in Koroška region. 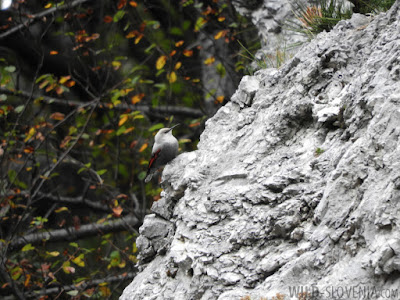 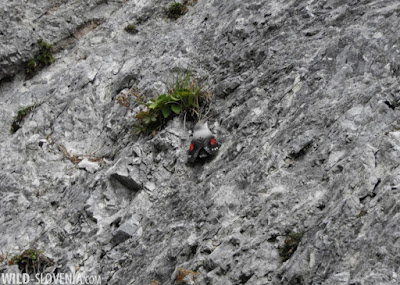 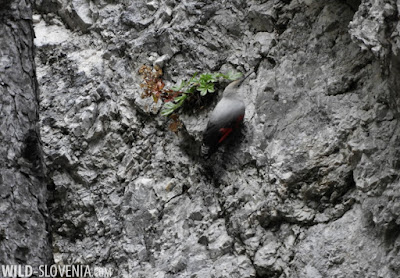 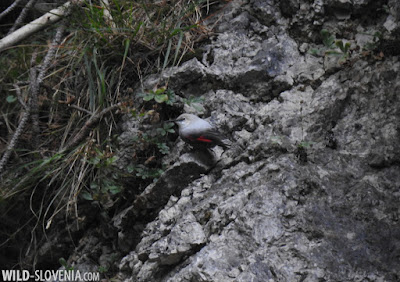