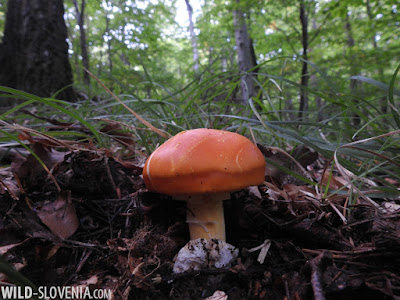 It's autumn and lately we've been spending more time concentrated on short forest walk to look for fungi (but also birds), usually in the Karst and nearby areas. On one occasion we also made a trip to the Julian Alps, but with nothing very exciting to report. Wildlife watching is rather slow in this season and interesting observations are few and sporadic. Some fungi ID keeps us entertained for the moment, although we have still a lot to learn on the subject. Below is a selection of some of the most interesting fungi we came across, although many are still nameless... we'll get there sooner or later. A few bird observations at the end of the post. 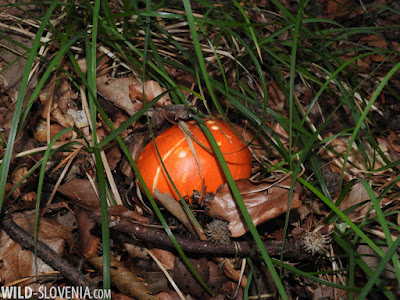 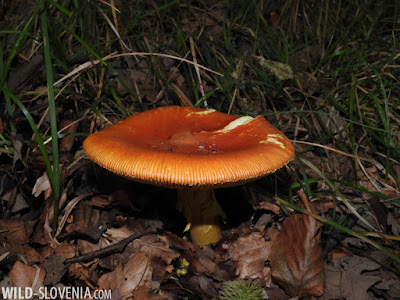 More or less the only birding we did was last weekend, when we visited the Kozjansko Regional Park in eastern Slovenia to attend a yearly birding competition called Ptičarijada, organised by DOPPS-BirdLife Slovenia. Birds are quite thin on the ground in this season and migration is nearly over, however we managed to see a couple of interesting species we don't usually see in western Slovenia like Stock Dove Columba oenas and Rook Corvus frugilegus. We were also happy with the first Brambling Fringilla montifringilla of the autumn season. However the most interesting sight was a Middle Spotted Woodpecker Dendrocopos medius climbing on Podsreda castle's wall to feed on the berries of Virginia Creeper Parthenocissus quinquefolia. A rather unusual behaviour for a woodpecker, but not that strange for a Middle Spotted after all.
Meanwhile in the first days of October the first Great Grey Shrike Lanius excubitor of the season has appeared in Škocjanski zatok Nature Reserve - other recent observations from the reserve here.