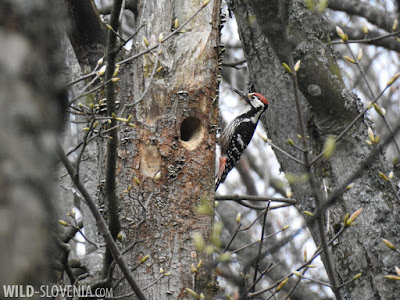 About 10 days after finding the nest of the White-backed Woodpecker Dendrocopos leucotos in the Dinaric forests of southern Slovenia (see this), the breeding cycle of "our" pair is nearing to the end. Yesterday we visited again the nesting site and observed at least two grown-up juveniles (male & female) begging for food at the nest-hole entrance. The parents were returning to the nest at regular and short intervals, delivering larvae and other insects to the hungry mouths. We estimated that in a few days the chicks will be out of the nest. So it was a good occasion to take some more photos & record a video - as always from a safety distance, to avoid disturbance to this rare bird.

This week we also enjoyed several diurnal encounters with Ural Owls Strix uralensis, as they now become more active in daytime hours too. The individual in the pic below was hunting along a forest road as we drove past and didn't mind us stopping nearby to take some photos. We had it increadibly close, from a distance of some 3 meters away from the car! Even later when it flew a short distance away, we were able to step out from the car and enjoy close views. 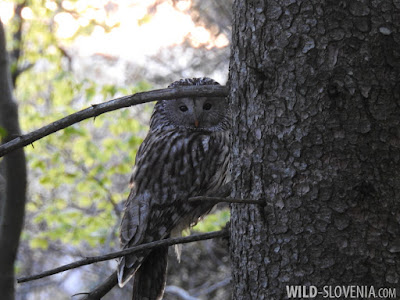 Ural Owl's main food, small rodents, are also out and about in good numbers. Mice and voles are usually difficult to see by day, but this year it's different. The forest floor is full of rodents as a consequence of last year's abundant autumn crops. It is now rather easy to observe these small creatures by day, like the one in the photo below (probably a Bank Vole Clethrionomys glareolus). When rodent numbers go up, their predator's populations also proliferate, therefore this year we expect a good breeding season for owls.