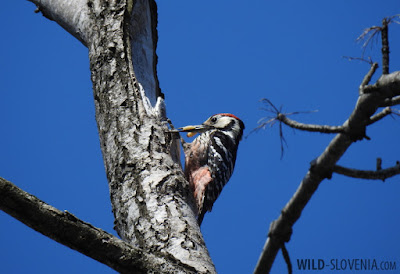 Bird activity in the Dinaric forests of southern Slovenia is reaching its peak with the breeding season in full swing. A few days ago we spent again an entire day in the Notranjska region - Domen working with a group of UK birdwatchers, while Sara was checking a White-backed Woodpecker Dendrocopos leucotos territory with the aim of finding a nest. Earlier in the day Domen and the group observed a male with a large larva in its beak (pic above), so Sara concentrated her efforts tracking down the pair. By the late afternoon she had succeeded in finding the nest! In the evening we watched the busy activity of the adults bringing food to the nest, which was located on a rather tall Sycamore Acer pseudoplatanus in an almost pure beech Fagus sylvatica forest. The chicks in the nest were already rather vocal, although they didn't pop out from the cavity yet. Our friend and WBW-expert from Finland, Timo Laine, who has joined us in Slovenia to study the species, estimated the chicks to be about 14 days old. 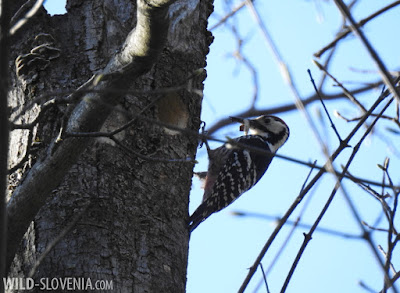 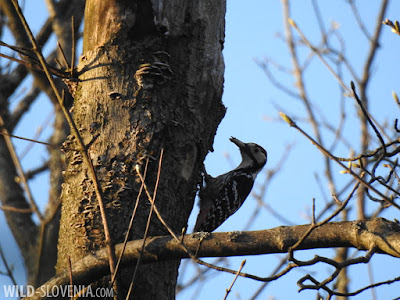 White-backed Woodpecker ranks among the rarest breeding birds in Slovenia, with an estimated 100-150 pairs, mostly spread in low densities across the Dinaric forests in the south. Given the rarity of the species, the finding of a nest is rather important for the study of the Slovenian population in detail. It is known that the species is one of the most specialised European woodpeckers, having a very narrow diet and habitat requirements. It needs large quantities of dead deciduous wood, where it feeds on wood-boring beetle larvae. However the site where our pair was found is far from typical - it is in a managed forest. Because of the low habitat quality, birds in Slovenia have generally a larger territory and need to rove around more in search of food. At the nest site we observed that male and female were bringing different food items: the male usually carrying a single large larva at a time, while the female was carrying multiple smaller prey, like ants and other arthropods. This might be due to the fact that male and female have a sexually dimorphic feeding behaviour - they search for food in different sections of trees.

In the evening, as we were leaving the nesting site of the White-backs and were logically very excited, we were caught by complete surprise by a large and dark bird gliding in the trees in front of us - it was a melanistic Ural Owl Strix uralensis! This dark, "chocolate" morph is present in about 10% of the Slovenian Ural Owl population (see this article). We have only seen a handful such birds in recent years, so it was a welcome surprise. As we observed in the field, encounters with dark morph birds tend to be rather fleeting. As the owl glided into the trees close to the White-backs nest, the woodpeckers started alarming and mobbing it. It was a scene you don't see very often! Later the owl called, revealing it was a male, while seconds later another Ural Owl sang in the distance. The latter was a normal light morph bird as we later discovered when the bird flew into view. 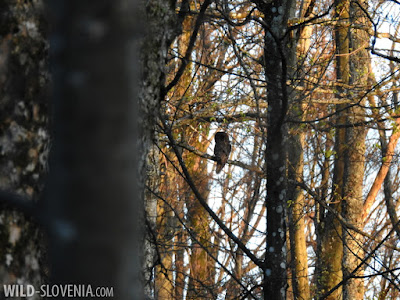 Earlier in the day, while escorting the group of birdwatchers in the forests and around lake Cerknica we made several other excellent observations. At a known breeding territory we successfully tracked down and watched a female Three-toed Woodpecker Picoides tridactylus drumming loudly on a standing dead fir. The tree was actually last year's nesting site! As Three-toeds haven't started with egg-laying yet, it is possible that the pair will nest in the same area (and tree?) again this year. 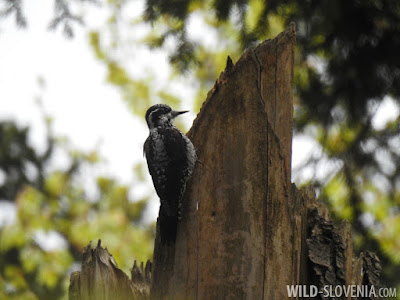 The forests of Javorniki produced other good birds, among which we observed another Ural Owl Strix uralensis as well as a nice female Black Woodpecker Dryocopus martius, showing to our lucky UK guests at the side of the road. However Sara had certainly better views when she went to check our local breeding pair in the Karst, earlier in the morning. The pair is doing well, nesting in last year's cavity and the adults are still incubating the eggs. 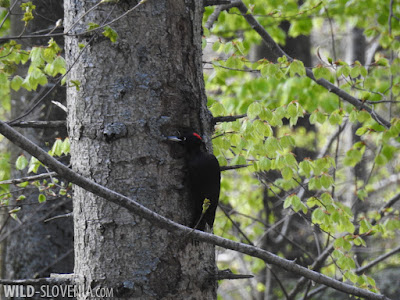