Autumn's magic in the Dinarides 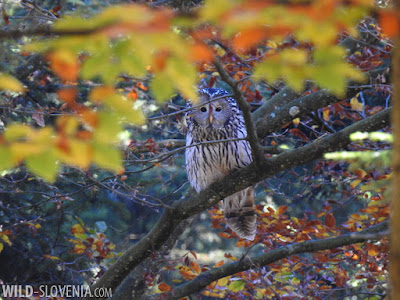 As you may have noticed, in autumn we like to wander around the Dinaric forests even more than in the other seasons. With so many repetitive posts, we hope not to bore our readers too much, but the places and wildlife we feature most (forests) are actually those most typical for Slovenia, so they are truly unavoidable. In the past ten days we have been visiting the Dinaric forests of Javorniki and Snežnik in the Notranjska region and of course seeing amazing wildlife with beautiful autumn colours. Below are the most interesting species we observed; make sure you also watch all the videos! ;-) 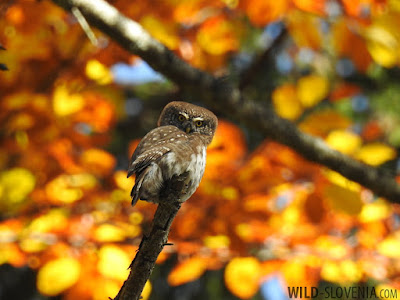 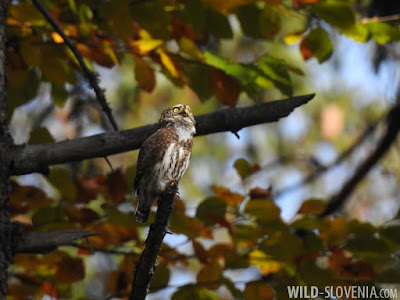 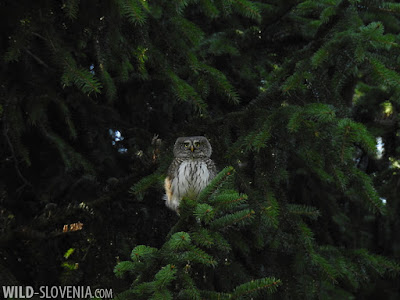 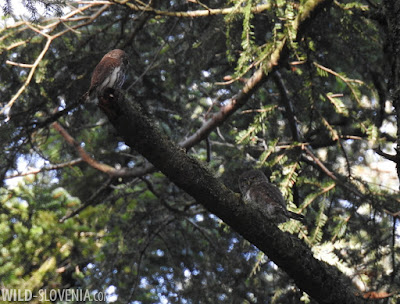 We are having great encounters with Pygmy Owls Glaucidium passerinum this autumn! We had no less than 5 birds in one day; two were on different locations, while three were together at the same site (maybe a family?). The last pic above even shows two inidivuals sitting on the same branch! All owls were first "whistled out", then we carefully approached and after spotting them in the conifer canopies, we could usually watch them for a long time. As they didn't really bother the presence of humans, they behaved spontaneously and allowed close views. Here's a VIDEO of two of the most showy individuals (watch HD). 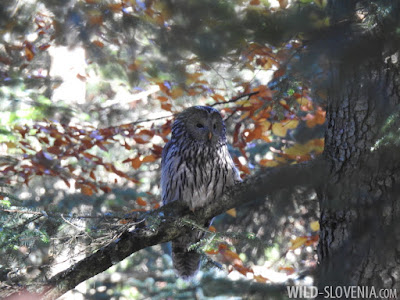 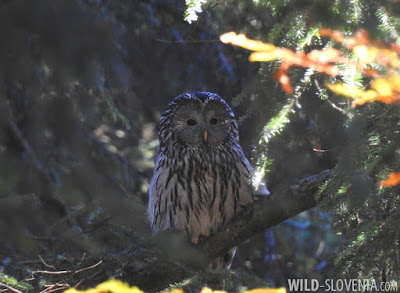 Ural Owls Strix uralensis are quite abundant in the Dinaric forests and encounters like the above, sometimes happen, especially in the autumn. This species frequently hunts by day and with a bit of luck, it can be observed even along the forest roads. We watched the above individual for at least half an hour and also recorded this VIDEO (watch HD). 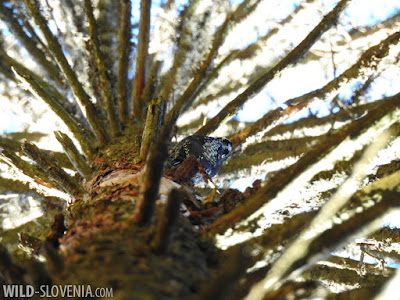 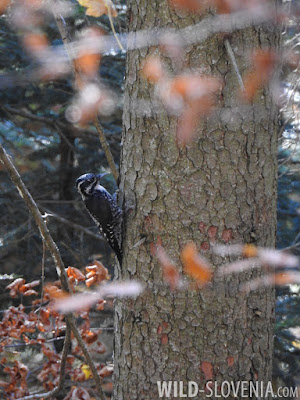 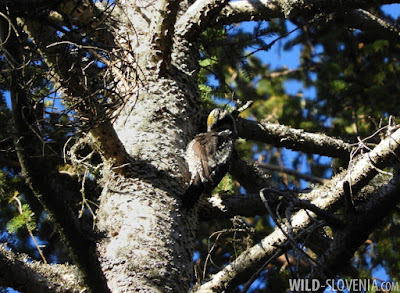 Of course we couldn't skip a visit to a prime Three-toed Woodpecker Picoides tridactylus habitat, where we first heard and then with a bit of fieldcraft, tracked down two birds: male (last pic) and female (top 2 pics) feeding close to each other. As usual with this species, both birds allowed good views and proved to be indifferent to our presence. Here's again a VIDEO (watch HD). 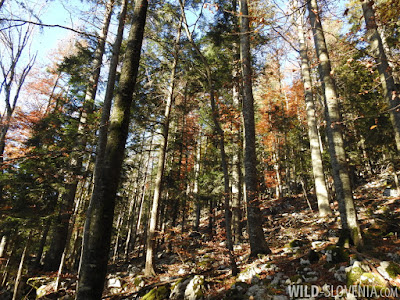 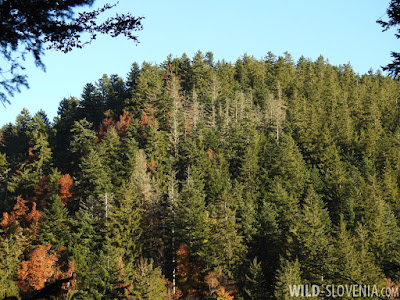 Two views on the Three-toed Woodpecker habitat: from "inside" (first pic) and "outside" (second). The area is a forest reserve, where logging is not allowed and the results are clearly visible. The Three-toeds we spotted were probably accompanied by a third individual (only heard), while a Black Woodpecker Dryocopus martius and a singing Pygmy Owl were also nearby (the latter can be heard in the video). 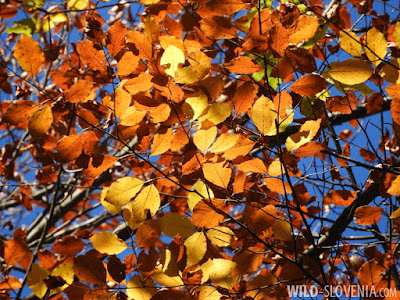 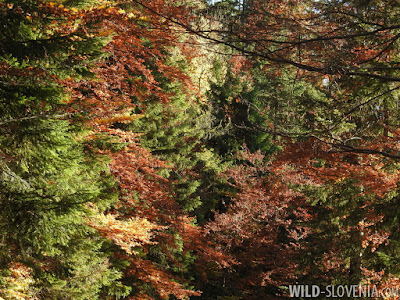 There were still some beautiful autumn colours in the forest, even more accentuated by the fantastic sunny weather. Beech Fagus sylvatica trees are now turning from orange to dark red, while Sycamores Acer pseudoplatanus have already lost their leaves. We are now entering into the last stage of the autumn tree's change: leaf shedding. 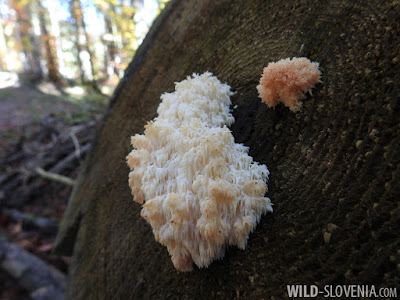 We also payed attention to the forest floor and found several species of fungi. Once again, we found the rare Hericium alpestre (H. flagellatum) on a cut silver fir Abies alba. This species was already featured in one of the previous posts from Trnovski gozd.
Below are more fungi species, some of which we managed to (almost) ID, also with the help of an expert. 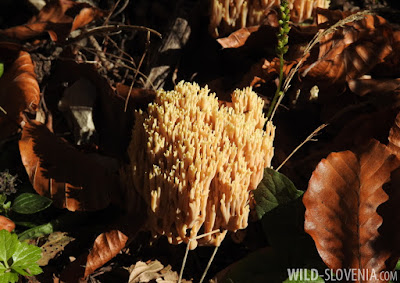 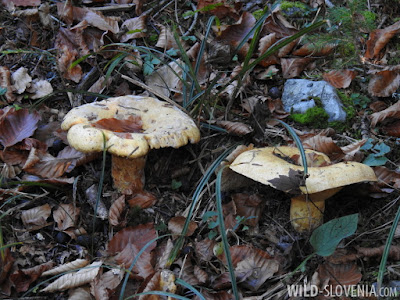 Lactarius scrobiculatus - a very common fungus in the Dinaric forests. 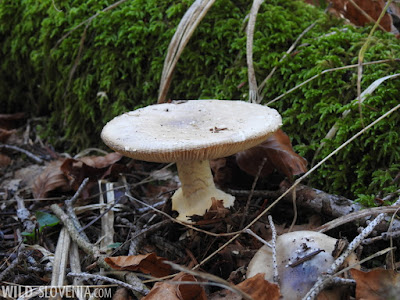 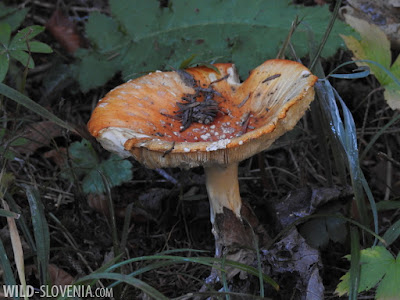 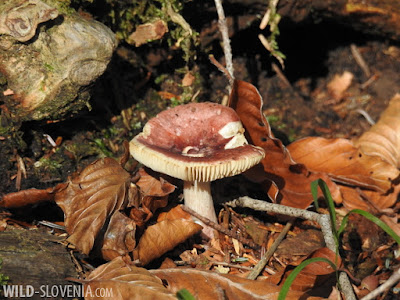 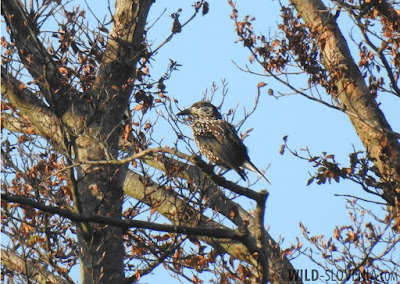 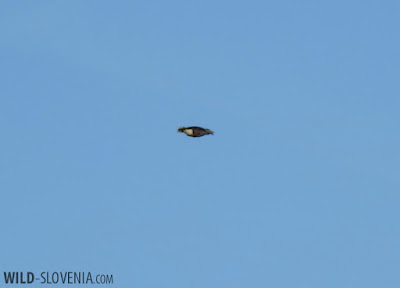 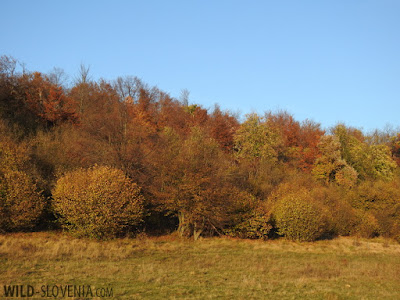 Recently we also had an interesting encounter with two Nutcrackers Nucifraga caryocatactes (top pics), feeding in a stand of hazels Corylus avellana (last pic) in the montane part of the Karst. The two birds were regulary observed carrying hazelnuts in their beaks (second pic), together with several Jays Garrulus glandarius. Hazels are an important autumn food for Nutcrackers, so at this time of year is probably easier to observe them outside their coniferous strongholds, where they tend to be more elusive.
Hopefully more Dinaric forests' reports in the next posts!
Posted by Domen & Sara at 08:43