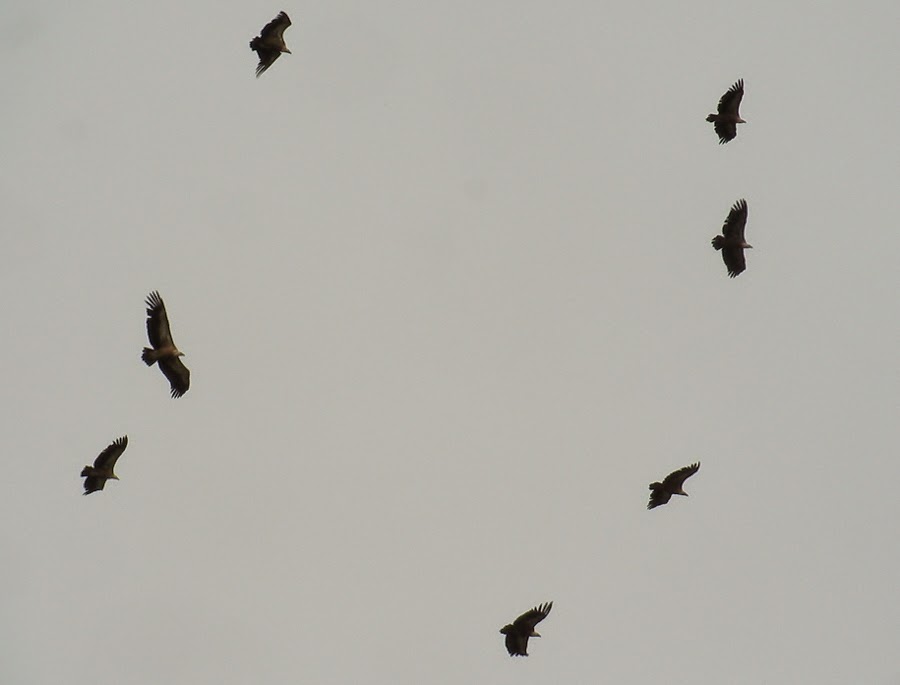 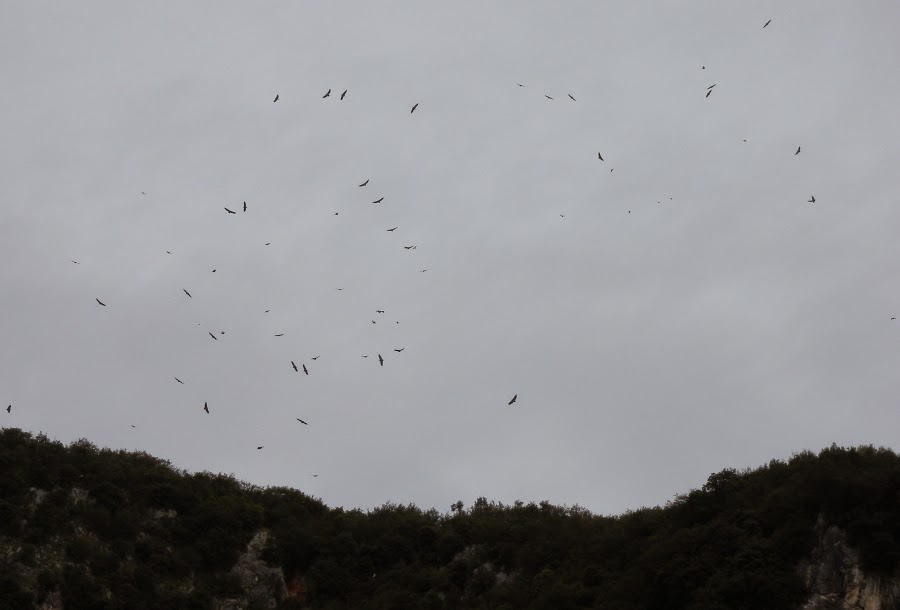 Today early in the morning I headed to the Cornino lake nature reserve (northeast Italy) with a friend. We went there with the mission of seeing a Black Vulture which has been present in the area since June - same mode as the one back in 2012 I went to twitch. But this time the feeding station (usually supplied with carrions) was empty and we didn't see the bird. However there were of course lots of Griffon Vultures Gyps fulvus perched on the rocky cliffs above the feeding station. By mid morning most of the flock was in the air simultaneously (see above). We counted at least 125 individuals.
Despite the dip it was still interesting on the raptor front: first a Hobby Falco subbuteo, then a female Goshawk Accipiter gentilis and then a pair of Honey Buzzards Pernis apivorus were in the air. The only animals on the feeding station were Ravens Corvus corax and a hungry Fox Vulpes vulpes.
Above the cliffs, together with the raptors were also some Crag Martins Ptyonoprogne rupestris and large numbers of House Martins Delichon urbicum (pre-migration flocks). The woodlands nearby offered a migrant Wood Warbler Phylloscopus sibilatrix, a Firecrest Regulus ignicapillus and other commoner species.
Later in the day, on the way home we made a stop at Valle Cavanata where 34 Flamingos Phoenicopterus roseus where on show, two of which also carring colour rings. Good to see there were also a juvenile Little Bittern Ixobrychus minutus, Purple Heron Ardea purpurea, 30 Grey Plovers Pluvialis squatarola (some still in breeding plumage) and a flock of about 140 Mediterranean Gulls Larus melanocephalus.
The last week has been relatively quiet. The highlight at Škocjanski zatok two days ago was my first Pied Flycatcher Ficedula hypoleuca of the autumn.
My local patch also offered a few goodies. I was most glad with two Crested Tits Lophophanes cristatus present for a couple of days in front of my house (quite showy and vocal). The sea also provided some sort of interest: a short seawatch yesterday revealed two Sandwich Terns Sterna sandvicensis very busy with fishing activities, accompanied by a Common Tern Sterna hirundo and a passage of 10 Med Gulls Larus melanocephalus. The occasional (autumn) Swallow Hirundo rustica has also been seen flying southwards. Yes, it's that time of year again...
Posted by Domen & Sara at 09:02