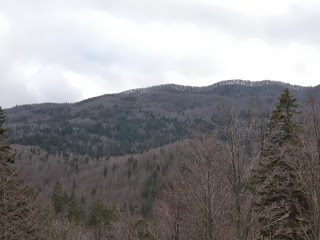 Been in the Trnovo forest (Trnovski gozd) today. It was my first visit in the middle of winter and it was made possible thanks to the absence of snow on the ground.
On the way to the forest, a few tactic stops along the Hubelj and Lokavšček streams near Ajdovščina produced 2 Dippers (one on each). Pleasant birds. One of them was so territorial it was even singing.
The highlight of the day came shortly after when I reached Predmeja (the forest edge) and had a look down into the Vipava valley. On the massive rocks overlooking the forested slope an adult GOLDEN EAGLE was perched in full view. After a few minutes, a thick cloud of fog rose from the valley and hid the bird (it actually hid the whole mountain). 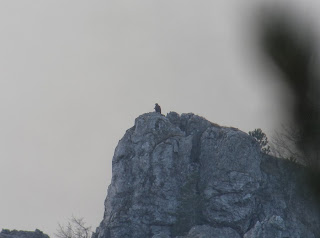 The situation in the forest was pretty lively with a lot of small birds' activity. Crossbill and Coal Tit were the most numerous, followed by Crested and Willow Tit, Goldcrest, Bullfinch, Treecreeper and finally Great Spotted & Black Woodpecker (3 heard). Several Nutcrackers were also pretty active and vocal and some allowed close views. In the course of the day I didn't stumble across any of the owls and I didn't even try an evening session.