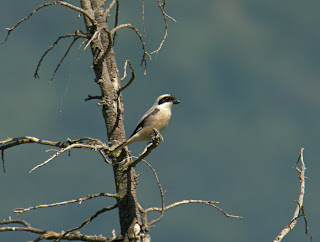 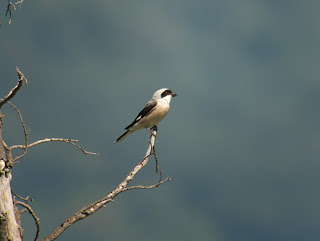 Breeding Lesser Grey Shrikes are now almost extinct in Slovenia. Perhaps the last remaining pair is the one in the Vipava valley. Yesterday I spent some time at the location and witnessed some amazing parental behaviour. There were 4 fledged and fully flying LESSER GREY SHRIKES around, along with the two adults bringing a constant food supply. The male was frequently seen flycatching (also dragonflies) or hunting other insects on the ground, while the juveniles were waiting up on the poplar trees.


Nearby was also a pair of Red-backed Shrikes and the male sat just a few metres away from the male Lesser Grey. From a front view, the only thing you could see were whitish underparts and a black mask in both species. The distinguishing feature was of course the extensive black on the forehead showed by Lesser Grey and the different bill structure (bulkier in LGS). A nice scene for comparison of both species. Note the differences below:
In a nearby vineyard a Hoopoe put also on show while feeding on the ground and a singing Crested Lark was also around.

Later in the morning I also had a look at the extensive upland grasslands of mount Nanos, which produced the hoped-for GOLDEN EAGLE - an adult soaring not too high above my head. If I don't go wrong, the last Golden Eagle I saw was here in the same place, back in 2010. I'm quite glad I saw one after a long time. Other raptors included a Griffon Vulture heading W, 1 Hobby (hunting), 1 Goshawk and 5 Buzzards. A few breeding passerines were also around: Chiffchaff, Common and Lesser Whitethroat, 2 pairs of Stonechat, Skylark and at least 4 singing Rock Buntings.