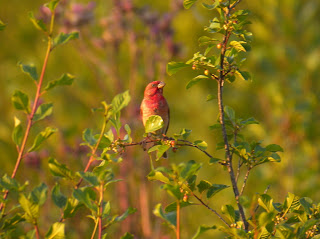 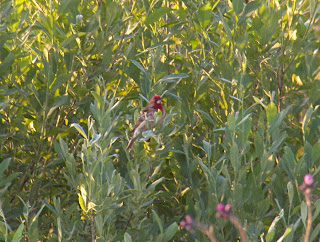 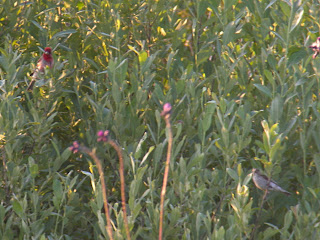 The Cerknica lake (or Cerkniško jezero) in Slovenia is a spectacular place that rarely disappoints. Yesterday was no exception when I ventured there for the evening with a friend. We started birding early in the afternoon around Postojna where we saw the local colony of Crag Martins, nesting along with good numbers of House Martins. We then checked the village of Planina and surroundings where a pair of White Storks was rising a brood in their nest. Here and in the other villages around the Cerknica lake the countryside birdlife was abundant (things like Black Redstart, Spotted Flycatcher, Linnet, Tree Sparrow, Skylark ect.).
After a few hours of birding the lake we amassed a good number of interesting species of which the highlight was with no doubt COMMON ROSEFINCH. At least 3 singing males were heard in different scrubby areas on wet meadows. One male bird in particular put on good show and allowed the best views while perched on low bushes (pics above) and a female was also close nearby (pictured in the last photo on the right).
During the afternoon we had a good selection of birds including: a SHORT-TOED EAGLE (soaring with a snake in the talons), Common Quail (2 singing males), Marsh Warbler (3), Great and Little Egret, Great Reed Warbler, White Stork (another local nest), Whinchat (quite common), Yellowhammer (5), Red-backed Shrike, Common Whitethroat (3), Yellow Wagtail (nesting behavoiur), Great Crested Grebes (families of ads+juvs), Honey Buzzard (4), Teal (about 30), Shelduck (1, I think this is a quite interesting record for the area), Marsh Harrier (1 f), Sedge Warbler (4), Golden Oriole (2), Tree Pipit (1), Hobby (1 hunting), Fieldfare (5, nesting birds in the area). A flock of about 30 or so Black-headed Gulls on the lake also contained an adult Mediterranean Gull which was fine.
Other interesting birds came shortly after the sunset in the form of the first singing CORNCRAKES. At the end of the evening we recorded at least 8 singing males around the lake. Not a very high number for the area, but of course the season is a bit late, so they tend not to be so territorial at the moment.
Shortly after also two GRASSHOPPER WARBLERS began to sing - which came as a bit of a surprise... a pleasant surprise!
We then headed for some "night safari" along the roads around the lake and encountered a few mammal species as well: Roe and Red Deer, Fox (2) and a Beech Marten.
Our last night stop on the lake's shores produced yet another two goodies. In a chorus of Marsh Frogs we managed to pick out the calls of both Porzanas breeding in the area: first a LITTLE CRAKE and then also a SPOTTED CRAKE. After a while both birds were heard singing together, so direct comparison was possible.
What a better way to round up the day?