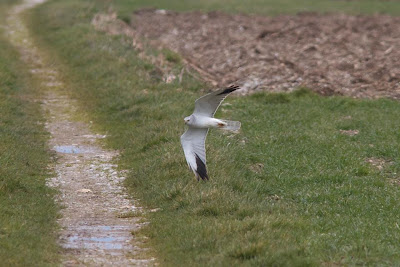 Yesterday I got a very strong dose of Pannonian birding, as I ventured into north-east Slovenia with four other friends. We were mainly after some scarce and rare migrant species reported in the past couple of days and we were very successful in finding them. We first visited the Ormož lake (on the border with Croatia), then the lake of Ptuj and finally the Medvedce reservoir (near Pragersko). First of all I must mention the incredible migratory movement that we witnessed from the car along the whole length of the motorway, mainly involving Marsh Harriers Circus aeruginosus (+50) and Common Buzzards Buteo buteo and huge numbers of finches (mainly Chaffinch Fringilla coelebs), all heading north.
We first went to Ormož because of a lingering female WHITE-HEADED DUCK Oxyura leucocephala that we spotted immediately upon arrival to the lake's shore. And the morning started with the right twist...
The bird was not even too far from the shore and was usually associating with some Mallards. I managed a couple of pics for documentation. Probably the same individual was present in the past few months in Austria and was quite popular up there. 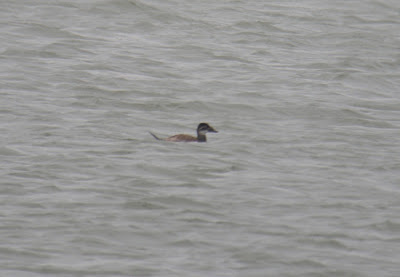 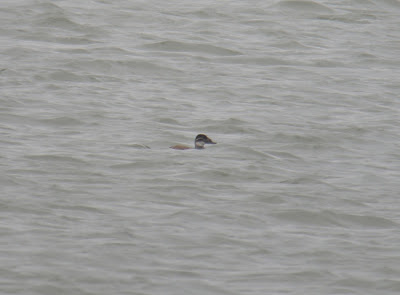 About 15 minutes later we were watching (from the car) the female LONG-TAILED DUCK Clangula hyemalis on the lake of Ptuj. The bird was still around in the same area where it spent the last months, but this time it was sporting a darker plumage.

Nearby were also some 5 Velvet Scoters Melanitta fusca, 2 Scaups Aythya marila and good numbers of Pochard Aythya ferina and Tufted Duck Aythya fuligula, plus some Goldeneyes Bucephala clangula. The lake's surface was covered in a huge cloud of Swallows Hirudno rustica (as were also Ormož and Medvedce reservoirs) and we must have had a total of more than 3000 birds in the course of the day. Mixed among them were also a few House Delichon urbicum and Sand Martins Riparia riparia.
From the female Long-tailed Duck we then pointed our scopes to the sky, where and adult WHITE-TAILED EAGLE Haliaeetus albicilla was soaring. Impressive!
Later our first Common Terns Sterna hirundo of the season appeared over the lake's surface.
After the stop on the lake, we moved to the nearby fields to see the rare swans and we found just 1 remaining BEWICK'S SWAN Cygnus columbianus (adult), along with five Mutes Cygnus olor.
A small wet alder woodland provided some good entertainment as well. Here we found our first Pied Flycatcher Ficedula hypoleuca (male) and Wood Warbler Phylloscopus sibilatrix of the year which were feeding on the trees, along with a couple of singing Willow Warblers Phylloscopus trochilus, Chiffchaffs Phylloscopus collybita and Blackcaps Sylvia atricapilla.

Overhead a Tree Pipit Anthus trivialis passed by (also year's first) and the open fields also yielded 2 Grey Partridges Perdix perdix, +100 Yellow Wagtails Motacilla flava, Meadow Pipits Anthus pratensis and some displaying Lapwings Vanellus vanellus.
Here we also had a major (mammal) highlight of the day in the form of a STOAT Mustela erminea running around the edge of the woodland and showing extremely well. 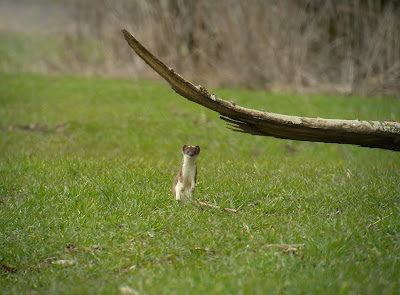 In the early afternoon we moved to the Medvedce reservoir and before arriving there we stopped on the fields north of Pragersko.
We had a small detour because of a male PALLID HARRIER Circus macrourus that caught our attention from the car. We watched the stunning bird performing extremely well in front of us, frequently hunting along with a male Hen Harrier Circus cyaneus, thus allowing direct comparison. At a certain point we had the bird flying in front of our car (actually cutting our way!) down to 5 metres!

So far one of the most intense days of my birding career!