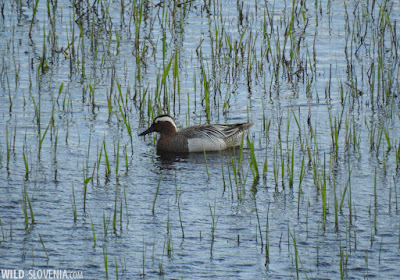 Spring migration has really kicked in and on Saturday 3rd April we had an exceptional morning at Škocjanski zatok Nature Reserve. This was mostly due to overnight precipitations, combined with a strong north-easterly wind that forced migrants to stop. The reserve's weekly monitoring took much longer than usual, but produced some truly good species for the area. Among the many newly arrived waders there were two showy Jack Snipes Lymnocryptes minimus (a rare sight), feeding in the wet meadows with about 35 Snipes Gallinago gallinago and a mixed flock of 63 Black-winged Stilts Himantopus himantopus (largest count for the species at the reserve), 25 Ruffs Calidris pugnax, 11 Wood Sandpipers Tringa glareola and 11 Green Sandpipers Tringa ochropus. A lonely Black-tailed Godwit Limosa limosa was also around, but even more interesting was a flock of 51 Whimbrels Numenius phaeopus dropping down from the sky and into the lagoon. Not only is this the species' biggest count for Škocjanski zatok, but probably also for the whole of Slovenia. The species is usually seen migrating singly or in small numbers and larger flocks are quite exceptional. However Whimbrels regularly migrate over the northern Adriatic, also in larger flocks (personal observations above Trieste), but usually very high up in the sky and are therefore rarely detected. The brackish lagoon also produced 7 Avocets Recurvirostra avosetta, 3 Little Ringed Charadrius dubius and 5 Kentish Plovers Charadrius alexandrinus, a Lapwing Vanellus vanellus, 7 Common Redshanks Tringa totanus and the usual Curlews Numenius arquata, Greenshanks Tringa nebularia and Common Sandpiper Actitis hypoleucos.

Around 25 Garganeys Spatula querquedula were scattered around the marsh in smaller numbers and two Purple Herons Ardea purpurea were on show in the freshwater reedbed, where a pair usually breeds. The wetland was constantly quartered by 3 Marsh Harriers Circus aeruginosus, flushing all the waders on a regular basis. The meadows bordering the freshwater marsh were full of Yellow Wagtails Motacilla flava of different subspecies (feldegg, cinereocapilla and flava) and among them we were also excited to see the first Hoopoe Upupa epops of the season, while a Wryneck Jynx torquilla was in the hedge bordering the lagoon. Other spring migrants included 7 Wheatears Oenanthe oenanthe, 2 Tree Pipits Anthus trivialis, 1 Willow Warbler Phylloscopus trochilus, 3 Sedge Warblers Acrocephalus schoenobaenus and a surprisingly early Marsh Warbler Acrocephalus palustris mimicking all sorts of birds in the hedge by the path. In the sky there were mixed flocks of hirundines, mostly Swallows Hirundo rustica (135 ind.), a few House Martins Delichon urbicum and several Sand Martins Riparia riparia, while also the first 2 Common Swifts Apus apus of the season were around. All in all an excellent mix of spring migrants. For more regular updates about the latest sightings at Škocjanski zatok NR check here & here. 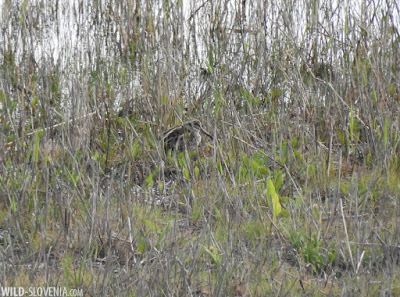 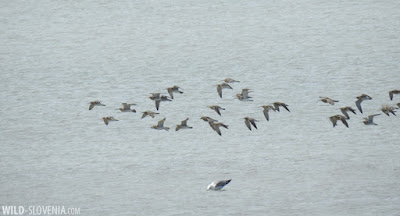 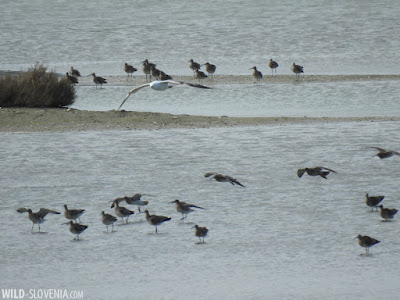 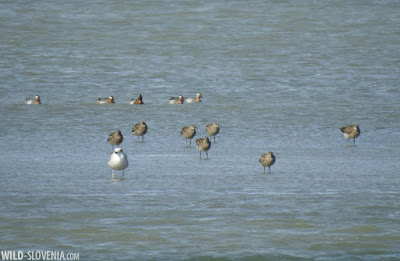 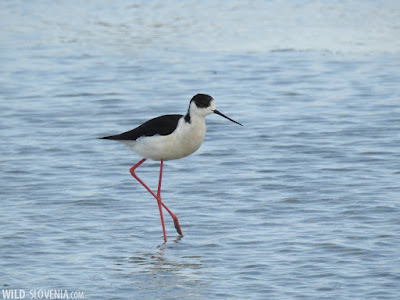 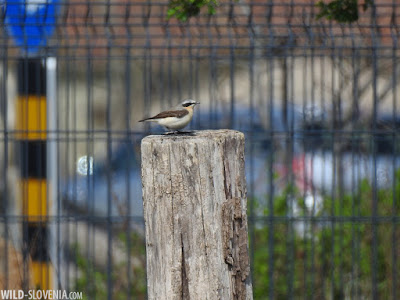 In the past week or so the sunny and very warm weather with mild southeasterlies has brought spring migrants to the Karst as well. Although it's still early to talk about the real "spring explosion" (still pretty wintry up here), we already heard our first Cuckoo Cuculus canorus and Wrynecks Jynx torquilla, while others reported Hoopoes Upupa epops, Nightingales Luscinia megarhynchos and Scops Owls Otus scops. In a week or so these summer migrants should become more numerous and prominent. The main interest for us was following our local pair of Short-toed Eagles Circaetus gallicus returning to its traditional nesting site, not far from our home. Hopefully more migration to report in the next days. Stay tuned! 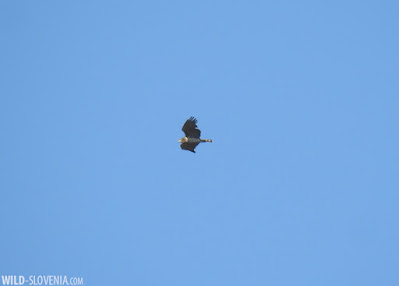