Life in the peaceful marsh 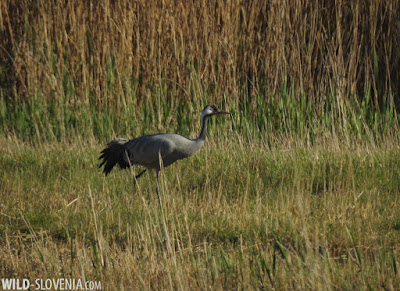 As we already mentioned in one of the previous posts, Škocjanski zatok Nature Reserve (where Domen works) is currently closed to the public, due to the general lockdown. However research activities (bird & wildlife censuses) are still carried out on a weekly basis. Almost immediately after the closing we've been noticing that the lockdown was very beneficial to the reserve's wildlife. The animals have quickly re-adapted to the absence of people. Normally the reserve is a popular place for joggers, dog walkers, noisy families and others who often mistake the reserve for an urban park. Actually, given the proximity to the town of Koper, this place could be easily defined an "urban nature reserve", however by no means an "urban park".
Therefore since the lockdown, we've been enjoying very much in the tranquility during our bird monitorings and in the overall abundance of wildlife. March and April are excellent months for bird migration and the 122 hectare reserve is a magnet for migrants. Last week, among the many spring arrivals back from Africa, we even got to observe a Common Crane Grus grus resting in the wet meadows - a rare sight in the reserve itself, due to the small size of the area and the shyness of the species. 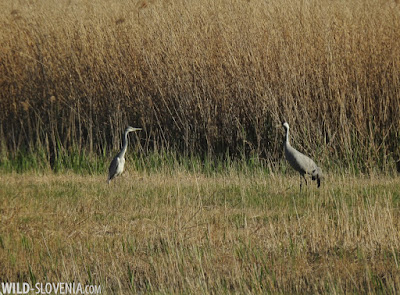 The small freshwater marsh is important for other migrants, some of them are breeding birds that nest in the reedbeds. One such example is the Purple Heron Ardea purpurea which breeds at the reserve with one pair (only site in Slovenia) and has returned in small numbers recently. Greylag Goose Anser anser is another rare breeder in Slovenia and it also breeds at the reserve - this week we observed a pair with 6 fledged gooslings. Great Reed Warblers Acrocephalus arundinaceus also breed in the reedbeds in good numbers and the first singing males have just returned from Africa this week. Other interesting migrants present at the reserve this and/or the past week include: Glossy Ibis Plegadis falcinellus (1), Spoonbill Platalea leucorodia (4), Bittern Botaurus stellaris (1), Night Heron Nycticorax nycticorax (2), Marsh Harrier Circus aeruginosus, Garganey Spatula querquedula (small flocks), Moustached Warbler Acrocephalus melanopogon (1), Sedge Warbler Acrocephalus schoenobaenus, Subalpine Warbler Sylvia cantillans (1), Common Whitethroat Sylvia communis, Lesser Whitethroat Sylvia curruca, Whinchat Saxicola rubetra, Northern Wheatear Oenanthe oenanthe, Alpine Swift Apus melba, Common Swift Apus apus (large flocks), Sand Martin Riparia riparia, Wryneck Jynx torquilla, Nightingale Luscinia megarhynchos and Yellow Wagtail Motacilla flava (flocks of up to 30 ind.). Last week we also observed a Fox Vulpes vulpes in the freshwater marsh after some time from the last sighting. 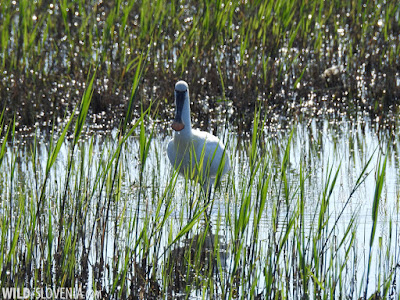 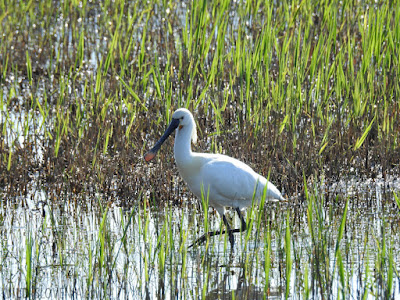 Stopover waders are also well represented these days with good numbers of Wood Sandpiper Tringa glareola (up to 30), Common Sandpiper Actitis hypoleucos, Ruff Calidris pugnax (20-30) and Greenshank Tringa nebularia (up to 60). About two weeks ago we had a record flock of 91 Snipes Gallinago gallinago in the brackish lagoon. These relatively good numbers of waders for the site are also due to the very low water levels in the lagoon, leaving large areas of exposed mudflats.
In general the brackish lagoon is extremely rich with birdlife at this time of year. Our breeding Common Terns Sterna hirundo have returned from Africa last week and now are already on their preferred islands, where up to 60-100 pairs breed. A very interesting breeding bird in the lagoon is the Avocet Recurvirostra avosetta, which last year bred here for the first time (four chicks were raised). This year we are observing a small group of 5 individuals, but we still don't know how many pairs we'll have. Shelduck Tadorna tadorna is also frequently seen in small numbers, but its breeding at the reserve hasn't been recorded yet. We expect it might breed soon. Other commoner breeders that have returned recently in good numbers include Black-winged Stilt Himantopus himantopus, Redshank Tringa totanus and Little Ringed Plover Charadrius dubius. 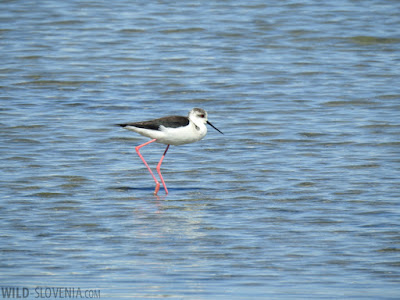 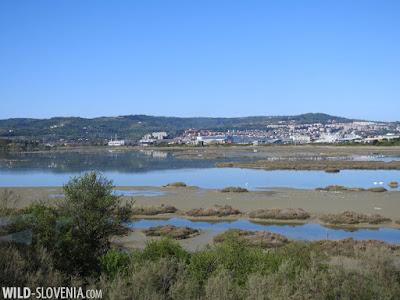 You can read more up-to-date bird news from the nature reserve on the Škocjanski zatok FB page or on the website.
Posted by Domen & Sara at 00:49