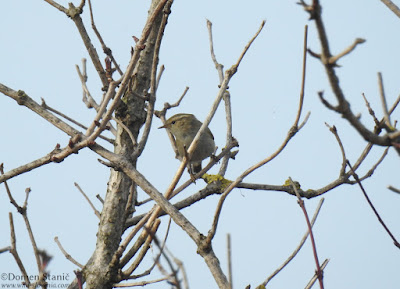 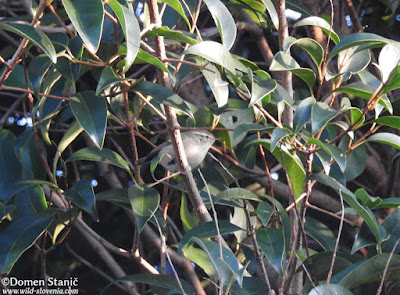 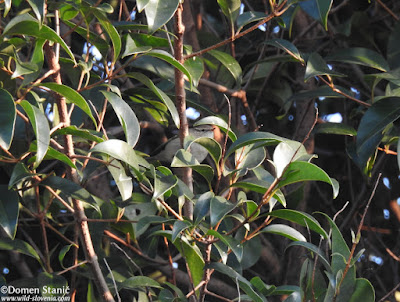 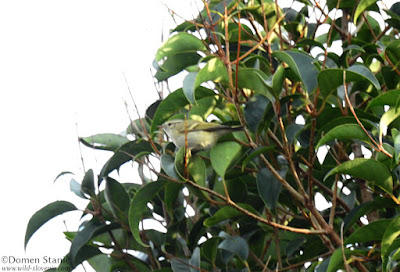 Since December 2019 there have been several records of Hume's Leaf Warbler Phylloscopus humei from Friuli Venezia Giulia, Italy's northeastern-most region, bordering Slovenia. As in other parts of Europe, this small bird, originating in Central Asia is considered a rarity and a vagrant. The first one this winter was observed in December at Duino/Devin, 20 km NW of Trieste, while several followed later, all in the southern part of the region, not far from the Adriatic sea. The last individual was found yesterday and represented the 6th Hume's Leaf Warbler of the winter in this small part of Italy. Given that one was found by our friend Paolo Utmar in his garden along the lower course of the river Isonzo/Soča, today we payed a short visit to this particular bird. A very lively little creature, showing well and close, but never staying still and thus making photography very difficult. Above are the very few shots we managed. Fortunately Hume's call is very distinctive - most people say it's similar to a White Wagtail's, however to be more accurate, it sounded more Tawny Pipit-like to us. Yesterday our friends from Tringa FVG made some better photos of the same bird (here & here) and also found a new individual, about 1 km away from Paolo's garden! Moreover they also checked all the other sites where Hume's were reported and totalised 4 different individuals in one day (more pics & videos with calls here). Given the circumstances, is there a Hume's Leaf Warbler wintering in Slovenia too? We'd say probably so. It only needs to be found!