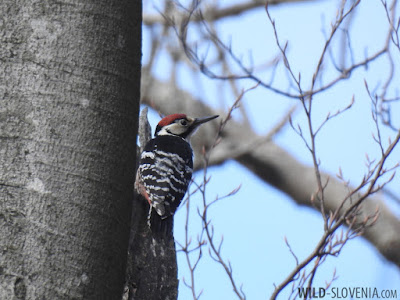 After about a month of unfavourable weather conditions (either strong wind or long-lasting snow cover), today we finally managed to carry out our census trasect for the White-backed Woodpecker Dendrocopos leucotos in the Javorniki mountains. The census is coordinated by DOPPS-BirdLife Slovenia and is one of the many yearly monitorings that targets important bird species within the Natura 2000 areas. White-backed ranks among one of the rarest woodpeckers, both in Slovenia and Europe. There are just about 150 breeding pairs in our country and the species is heavily threatened by intensive commercial logging. White-backed is a specialist woodpecker of old broadleaved forests, relying on large amounts of dead wood. A high biomass of dead and decaying broadleaved timber (mostly beech Fagus sylvatica) is essential in its habitat. Here it can find its main food - wood-boring beetle's larvae. Old beech forests that can support this woodpecker are rare and hence, the woodpecker itself is rare too.
Despite some bitter results from previous similar censuses earlier this year, today our transect was an enormous success. We were expecting perhaps a White-backed or two along our 15-points transect, but instead we were surprised by a staggering 7-8 individuals! Two were the already-formed pairs, while the rest were territorial males, coming to inspect us as we blasted their drummings with a playback (a scientific census is the only occasion when the use of a lure is justified). The lonely males showed all pretty well, even drumming back in front of us, while the pairs apparently had other matters on their minds and quickly vanished, after checking us first. We had plenty of opportunities for taking photos and record videos, although the light was terrible most of the time: 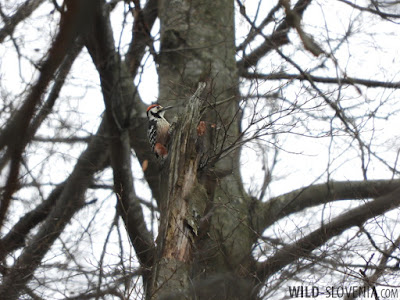 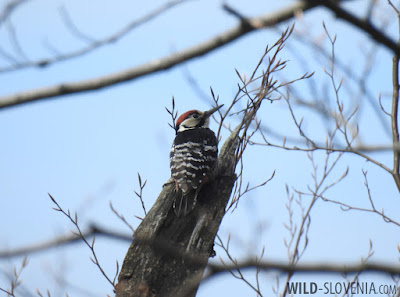 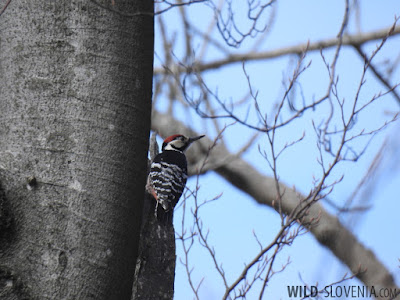 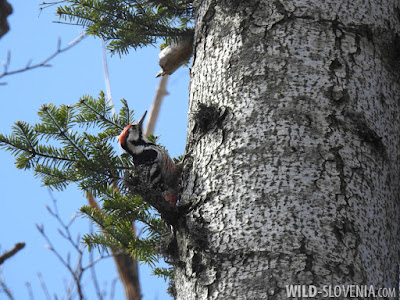 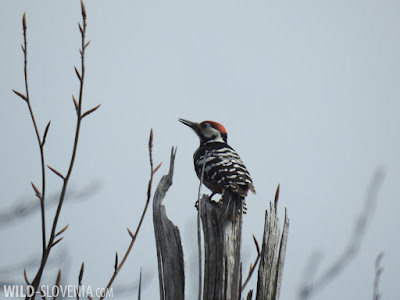 The forest was otherwise rather quiet, apart from a pair of Ural Owls Strix uralensis that we found by accident (as it frequently happens), a Grey-headed Woodpecker Picus canus calling and a probable Three-toed Woodpecker Picoides tridactylus only heard drumming in the distance. The woodland floor in the beech forest was covered by wonderful and smelly leaves of Ramsons (or Wild Garlic) Allium ursinum, as well as the first flowers of Blue-eyed Mary Omphalodes verna. The latter is a typical spring flower of the Dinaric forests (forming the association Omphalodo-Fagetum). 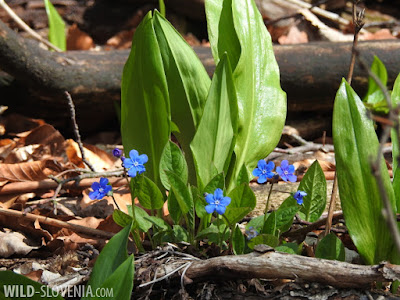