Northern rarities over the border 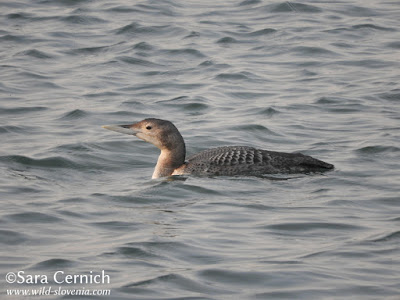 Winter is a rather poor time of the year for wildlife watching in Slovenia. In the cold season birding seems to be the only satisfying activity that keeps us going till spring. However most of the areas we usually work (including the Karst and the Dinaric forests) become almost devoid of life in winter, due to cold and snowy weather. Wetlands on the other hand, provide the best chances for seeing a greater variety of species. Even more so, just a few kilometers from Slovenia's south-west border, in northeastern Italy, lies and incredibly rich area of shallow sandy coastline, dotted with nature reserves and wetlands, that provides wintering grounds for a whole variety of birds. The Gulf of Panzano (situated in the northernmost part of the Gulf of Trieste, near Monfalcone) is certainly Italy's birding hot-spot at the moment. About a week ago, an extremely rare Yellow-billed Loon Gavia adamsii (aka White-billed Diver) was discovered on the sea near Duino (Devin), a mere 3,5 km from Slovenia's south-western border. As there are apparently less than 10 observations of Yellow-billed Loon for Italy, the event caused a major wave of twitching, with birders coming to see the rarity from all over Italy, but also from Slovenia and Austria. We ourselves don't usually go to see rare birds (not anymore), but as we happen to live only 25 minutes away from the site, this time we made an exception. Thus we joined the masses and enjoyed very close views of this rare northern bird. We frequently observed it diving and fishing crabs, sometimes extremely close to the shore, always at its favoured area near Villaggio del Pescatore (Ribiško naselje) at the river's Timavo (Timava) estuary. 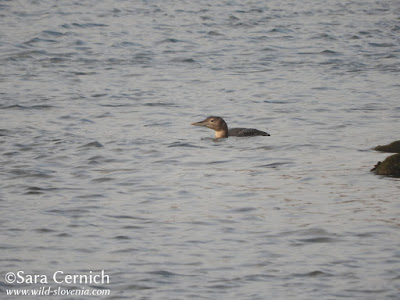 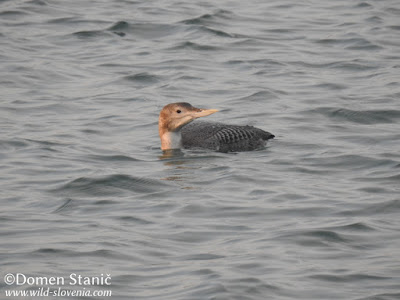 The Yellow-billed Loon breeds along the arctic coasts of Russia and winters in small numbers on the coasts of north Norway, as well as rarely in the Baltic and the North Sea. Interestingly this is not the first record for the Gulf of Trieste, as the species has already been recorded here at least two times (including in Slovenian waters). Amazing is also the fact that two winters ago we observed another rare diver for the Adriatic, a Great Northern Diver Gavia immer, right in the same stretch of coast (see this post). Not to mention that the area is a favoured wintering site for the two commoner species of the same genus: Black-throated Gavia arctica and Red-throated Diver Gavia stellata, both present here in good numbers.
Not far away from the rarity, in the wetlands along the river Isonzo (Soča), like every year, a large flock of wintering geese is present. It consists of +3000 White-fronted Geese Anser albifrons as well as a few thousands Greylag Geese Anser anser. During the last 10 years or so rarities like Red-breasted Goose Branta ruficollis and Lesser White-fronted Goose Anser erythropus have become more or less regular guests in these large flocks of geese. This year there's one Red-breasted and one Lesser White-front, as well as a Barnacle Goose Branta leucopsis (of uncertain origin). During a short morning visit to Isola della Cona NR a few days ago, we were lucky to have the bulk of the flock right in front of our hide and were able to spot successfully all the rarities. 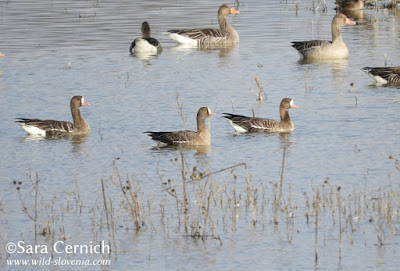 At Isola della Cona two Sacred Ibises Threskiornis aethiopicus (probably escapes) were also present, as well as 2 Black-throated Divers Gavia arctica. A Long-tailed Duck Clangula hyemalis was also reported the day before, but we weren't able to find it. However we rounded up the day with an interesting Red Squirrel Sciurus vulgaris sporting an unusually pale fur - probably a kind of leucism.