Lake Cerknica and its forests 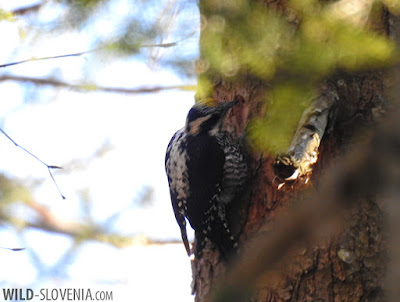 The temporary lake of Cerknica is always worth a visit, even in a relatively calm season like late autumn. A few days ago we headed to the lake area, hoping to catch up with some good birds, including perhaps the odd migrant Common Crane. The lake was full of water and held quite a lot of birds too. First of all there was an adult White-tailed Eagle Haliaeetus albicilla perched on a pole at the lake's shore. Then we checked the wildfowl and spotted some interesting wintering birds like the first Goldeneyes Bucephala clangula of the season (7 in total), 2 Ferruginous Ducks Aythya nyroca and the commoner Pochards Aythya ferina, Tufted Ducks Aythya fuligula and Wigeon Anas penelope. Interesting was also the presence of 40 Shelducks Tadorna tadorna (a rather scarce bird inland) and 7 Black-necked Grebes Podiceps nigricollis. 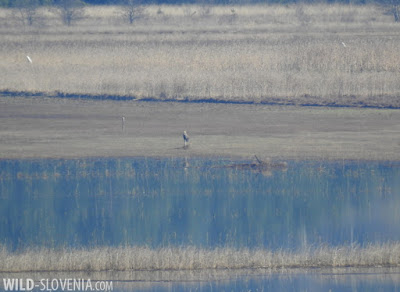 Then some loud and very distinctive calls alerted us to the presence of a flock of Common Cranes Grus grus passing overhead. On such a beautiful sunny day, they were migrating straight overhead to the west, but passed relatively low above the lake. We were very happy to see them indeed, as these were our first (and only?) cranes of the autumn passage this year. Even this year large numbers passed above our region in late November. 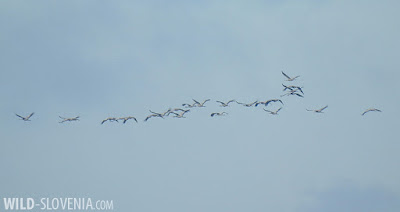 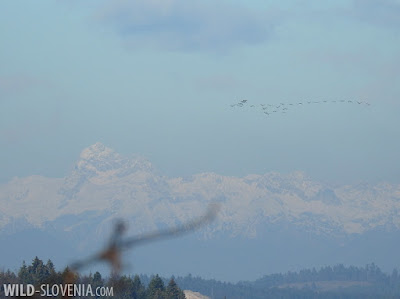 Minutes later we heard again some loud calls in the sky, but these belonged to White-fronted Geese Anser albifrons. A flock of around 80 birds was migrating westwards, probably to the farmland and wetlands of northeastern Italy, where large flocks are already present. Actually a wintering flock of at least 3000 White-fronts, present at Isola della Cona Nature Reserve near Gorizia, hosts also a Red-breasted Goose Branta ruficollis and a Lesser White-fronted Goose Anser erythropus. We didn't go to look for these rare geese yet, but we migth give them a try in the coming weeks. 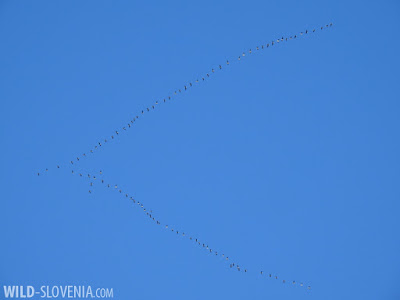 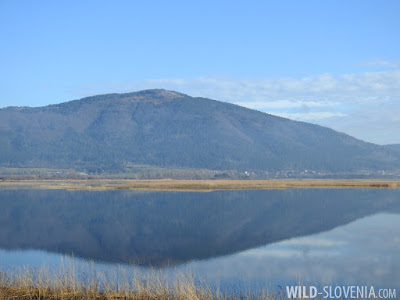 After spending the morning around the lake, we simply couldn't resist to the call of the forest and so we were soon driving on the forest tracks of the Javorniki-Snežnik mountains. We wanted to spend some time looking for a Three-toed Woodpecker and that's exactly how most of the afternoon was spent. Finding a Three-toed Woodpecker usually requires some walking up very steep and rocky forest terrain, where the species likes to hide itself, in old and undisturbed conifer stands. The usual giveaway of the presence of this rare woodpecker is the characteristic tapping on trees that the bird does when it feeds. When you hear it, you simply need to follow the sound. The problem is there are Great Spotted Woodpeckers Dendrocopos major too around and distinguishing the different tappings isn't always easy. A general rule applies here: if the bird insists with its tapping when you approach, then it's probably a Three-toed, while if the bird flies away it's probably a shy Great Spot. Three-toed Woodpeckers aren't shy at all and when feeding they usually allow very good and close views. After an exhausting hike uphill, following one such "good" sound, we were finally putting our eyes on a fantastic male Three-toed Woodpecker Picoides tridactylus! Nearby was also a female and the two birds (a pair we actually already observed in the same area) were frequently feed together on large wind-fallen silver firs. We stayed with them and enjoyed in the constant sound of "knocking" for more than an hour. Despite this, we didn't manage to take any good photos, but we were very happy nevertheless. We then rounded up the day with a Ural Owl Strix uralensis that we flushed from the side of the road, as we were driving back home in the evening. 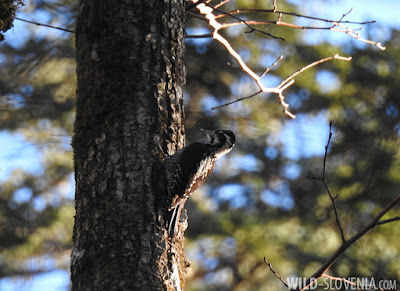 Earlier last week we made one or two brief walks in the karstic woodlands near Sežana and observed a pair of Middle Spotted Woodpeckers Dendrocopos medius, as well as a flock of more than 40 Redwings Turdus iliacus, feeding in the leaf litter and on ivy berries in the trees.