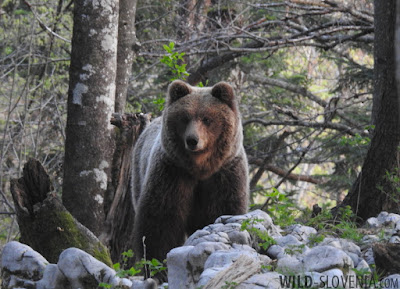 Yesterday we were again at work in the Dinaric forests. In the morning we had to check a set of nestboxes for Ural Owl Strix uralensis, while in the afternoon we had a more leisurely time, accompanying some clients at a bear-watching session in the hides (see slovenianbears.com). After about 4 hours of waiting, a beautiful mother Brown Bear Ursus arctos and her cub silently appeared, as if by magic! It was around sunsent and light was fading fast, but we still managed to take a couple of shots and a series of videos. The bears remained in front of the hide for about half an hour, right until a Tawny Owl Strix aluco started to sing, announcing the descend of night. 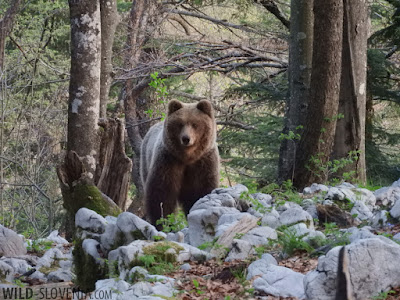 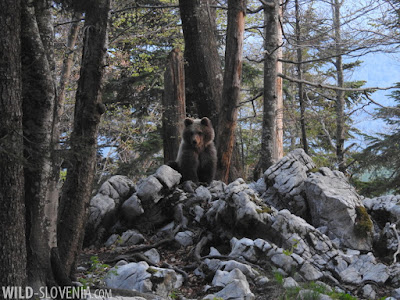 The morning was also very productive. Out of 10 nestboxes checked, one was occupied by a Ural Owl Strix uralensis. As the bird was probably incubating the eggs, we left the area quickly and didn't take any pics. But fortunately we had other Ural Owls to enjoy. We were lucky to observe again the melanistic individual that we already had at the beginning of April (see post), as well as to find a second dark-coloured individual. A local ornithologist told us that 10% of the Ural Owls of this region are melanistic. Moreover we also saw 3 of the commoner, light/grey-coloured individuals. Of the other birds we had Black Woodpecker Dryocopus martius, Grey-headed Woodpecker Picus canus, Nutcracker Nucifraga caryocatactes and Peregrine Falco peregrinus.
As usual there was a nice supporting cast of forest flora, among which Scopolia carniolica was the most interesting find (found only at one site). The forest floor by now is literally carpeted by Blue-eyed Mary Omphalodes verna and the leaves of beech Fagus sylvatica have turned to their beautiful light-green colour.

In a few days we'll be back to Notranjska for a tour, so hopefully more interesting updates to come. A busy season is about to begin, so expect shorter posts and a greater activity with photos on Facebook. See you soon!
Posted by Domen & Sara at 09:30