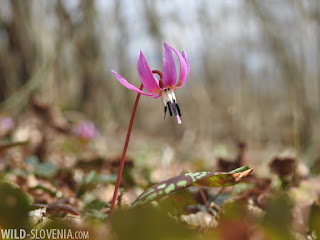 Spring is making a slow appearence in the Slovenian forests. The Karst, in western Slovenia, being rather termophilous, is quite alive with woodland flowers and bird songs. On the other hand, the season in the Dinaric forests of the Notranjska region is very late, with a layer of up to 30 cm of snow in the areas above 700 m.a.s.l. However, some animals and flowers are waking up in this cold region too. Last week we've visited the Cerknica lake and surrounding areas as well as completed a few more transects for the census of Middle Spotted Woodpecker Dendrocopos medius in the Karst. 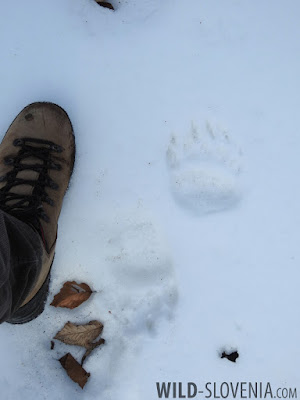 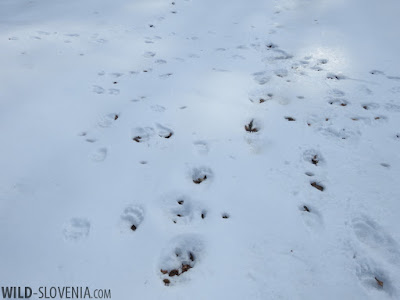 Brown Bears Ursus arctos are waking up from the winter sleep and are wandering around the snow-covered forests of Notranjska. We found the above tracks, of at least two bears, on a small glade by the forest road that circles lake Cerknica. This video shows the season's first Brown Bear at the bear-watching hides in Loška dolina.

Whilst driving around lake Cerknica this fantastic Black Stork Ciconia nigra was spotted circling above the road. The species has just returned from Africa and will stay in Slovenia throughout summer to breed in some quiet forests. There's at least one pair breeding somewhere around lake Cerknica and birds are regularly seen feeding on the lake in spring and summer. Their commoner cousins, White Storks Ciconia ciconia have returned too - we observed one pair in the fields by the lake. 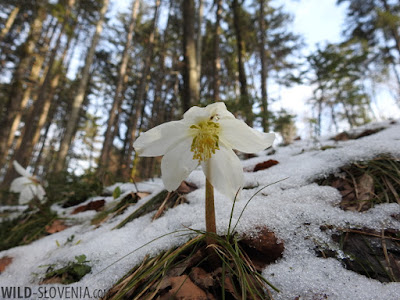 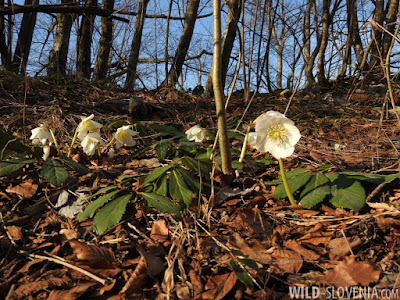 The forest floor in the Dinaric mountains is still snow-covered and vernal blooms are still quite poor. But one species in particular, the Christmas Rose Hellebrous niger, is very prominent in patches of snow-free leaf litter, especially close to the roads. 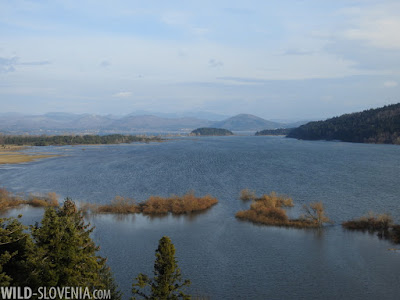 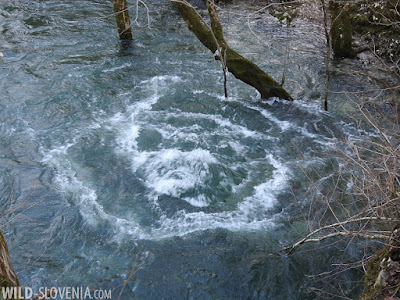 The temporary, karstic lake of Cerknica is full of water in this season. The lake's surface area now covers almost completely the Cerknica plain (polje) and the dozens of sinkholes spread around the lake are delivering a heavy load of water (second pic). Melting snow in the Javorniki hills and heavy spring rains are the main source of water to this intermittent lake. By mid-summer the lake will (should) be almost completely dry as the water will have flowed back into the same sinkholes. In the meanitime, many migrant waterbirds are exploiting the vast water bodies. 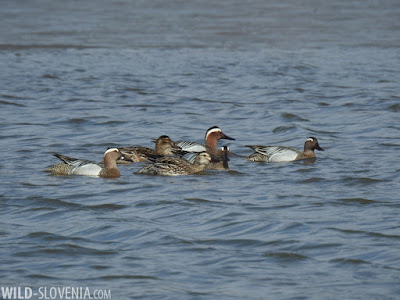 This small but very showy group of Garganeys Anas querquedula was in a feeding frenzy in a puddle on the Cerknica plain. On the lake itself there were several tens of other Garganeys, as well as Pintails Anas acuta, Shovelers A. clypeata, Wigeons A. penelope and still some wintering Goldeneyes Bucephala clangula. 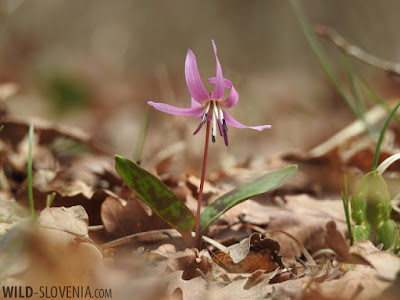 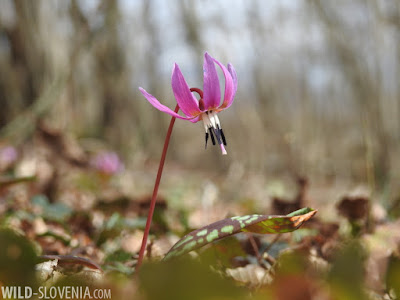 The beautiful Dog's-tooth Violets Erythronium dens-canis are now in full bloom. The above were photographed in the Karst, where the species is not very frequent as elsewhere in Slovenia. However densities are quite high in some karstic oak woodlands with acidic soils. 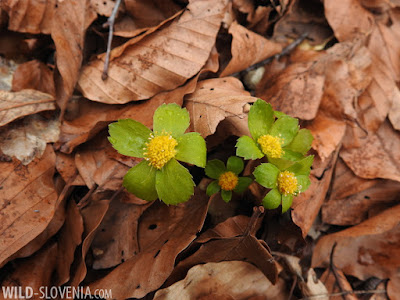 Hacquetia epipactis is also carpeting the forest floor at the moment. It is found in woodlands throughout Slovenia, but more commonly in those with oaks Quercus sp. and hornbeam Carpinus betulus. Its "flower" is actually a pseudanthium - a group of many small flowers (the yellow ones) forming a single flower-like structure. 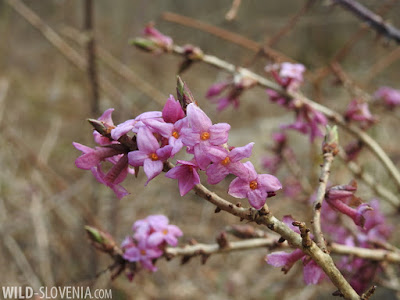 Mezereon Daphne mezereum is quite scarce in Karst's woodlands, but widespread elsewhere in Slovenia. The small pinkish flowers appear well before the leaves and grow directly out of the stem. The whole plant, including flowers and berries, is very toxic.

This short video was filmed in the Karst yesterday and shows a male Black Woodpecker Dryocopus martius entering a roost hole in the evening. Turn on the volume and listen for the bird's drumming at the beginning. Video also on our YouTube. 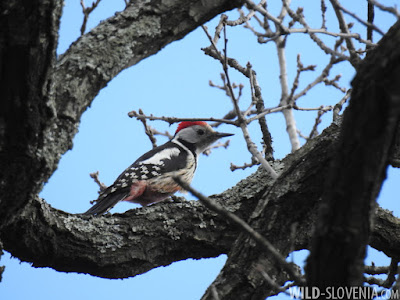 And for the end, yet another karstic Middle Spotted Woodpecker Dendrocopos medius during a recent census. We simply can't get enough of them! Can you? :-)