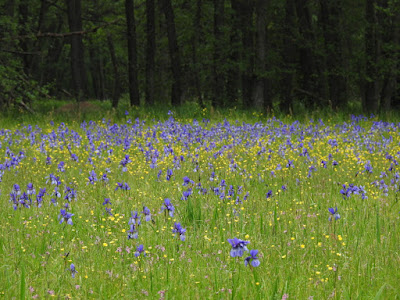 The Notranjska region in central and southern Slovenia has some of the most scenic landscapes of the country. Lake Cerknica (Cerkniško jezero) with its surroundings is the most famous wetland area in Notranjska, but it's not the only one. Not far from Postojna one can find some wetland treasures such as the Pivka temporary lakes and the Nanoščica river basin. Recently we visited these two areas in search of rich wet meadows, interesting plants and birds. 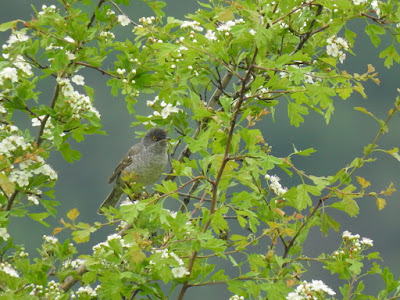 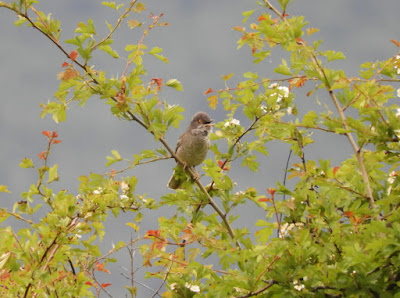 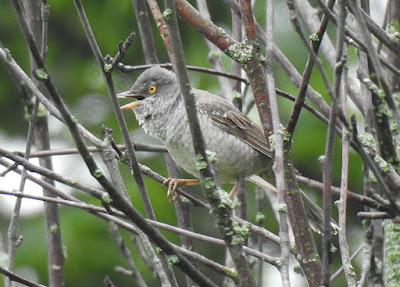 The most interesting bird we encountered at both sites was Barred Warbler Sylvia nisoria. The wet and dry meadows around the Pivka lakes host high densities of this species and probably even the largest populations in Slovenia. Barred Warbler was one of the commonest species to be heard in the hedgeds, hawthorn bushes and small trees. Two territorial males were even singing less than 30m from one another, on neighbouring bushes. With such an abundance there were of course plenty of oppurtunities to watch this secretive species more closely. 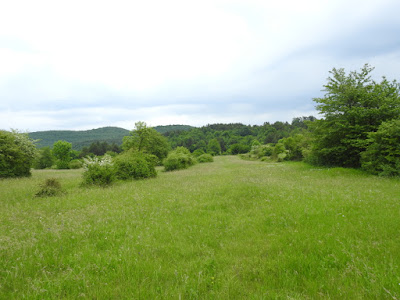 Barred Warbler habitat with open meadows, hedges and small trees used as singing perches. Hawthorn Crataegus sp. seems to be an important element in the species' habitat. The warblers usually sing from the top of bushes, but remain almost always concealed by some leaves and are difficult to observe properly in full view. 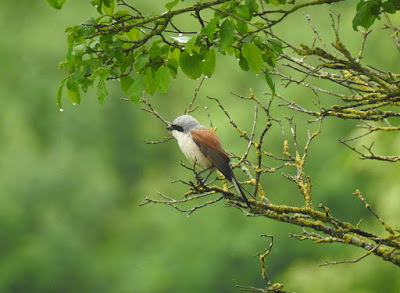 Another typical element in the breeding habitat of Barred Warblers is another bird: the Red-backed Shrike Lanius collurio. Some scientists say the two species have a mutualistic relationship and like to nest in close proximity with one another. The main reason is a better protection from predators at the nest and thus a higher reproductive success. In Slovenia wherever you see a Barred Warbler, a Red-backed Shrike is always in the vicinity! 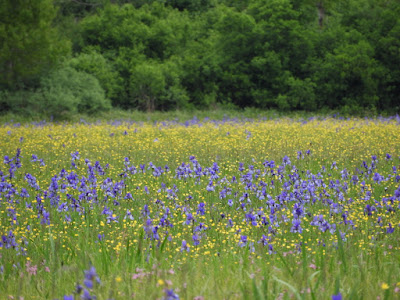 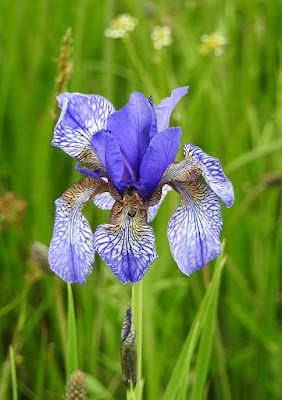 On the botanical front the real star of the wet meadows was Iris sibirica. On the Nanoščica river basin (but also at Pivka lakes, Planinsko polje and Cerkniško jezero) this species forms large blue carpets in late May. Iris sibirica growing on wet meadows belong to the nominate subspecies (sibirica), while on dry mountain karstic meadows the rarer subspecies erirrhiza can be found. 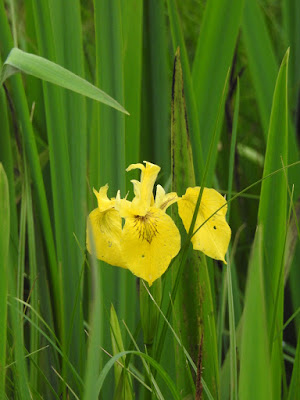 The only yellow iris in Slovenia, Iris pseudacorus is quite common in canals, ditches and lake margins, always growing in or close to water. The above was also photographed along the Nanoščica river. 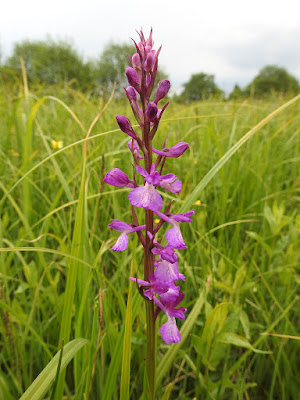 Anacamptis palustris - an endangered orchid of wet meadows, photographed near the Nanoščica river, where this was the only specimen we found in flower. It is more common on the extensive grasslands of Planinsko polje and Cerkniško jezero. 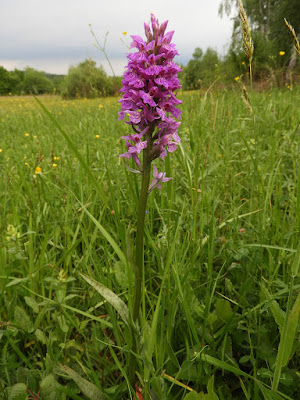 Dactylorhiza majalis was the commonest orchid on wet meadows of the Nanoščica river. Its main characteristic are the dark-spotted leaves. Later on it will be replaced by the very similar D. incarnata, which has a differently shaped labellum and unspotted leaves. 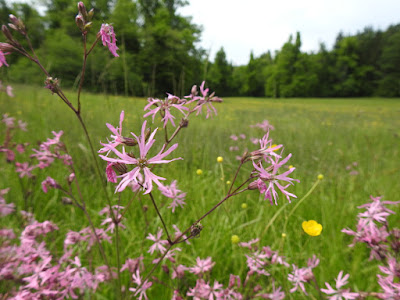 Lychnis flos-cuculi is a common and widespread wetland flower, typical of canal margins and wet grasslands. Although the single flowers are quite weak and thin, the plants can form large pink carpets. 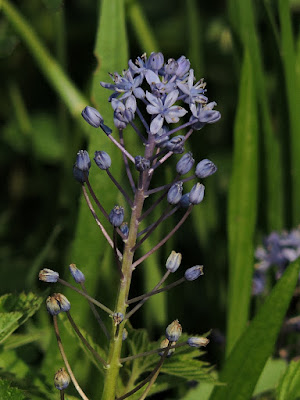 We haven't seen this species on our last trip, but it's still worth mentioning in this post. It is named Scilla litardierei and is an illyric (western Balkanic) species. In Slovenia it is only found on the wet meadows of Planinsko polje and this site also represents the north-westernmost tip of its distribution range. Needles to say it is also protected and potentially endangered by the intensive exploitation of wet grassland ecosystems. The pic was taken on Planinsko polje a few years ago. 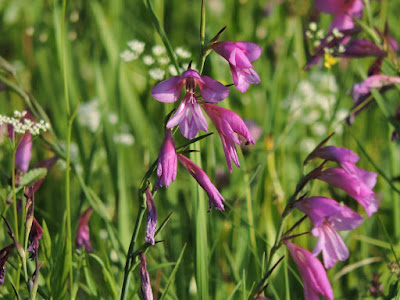 Gladiolus illyricus is another plant we haven't yet encountered this year, but which is very common on certain wet meadows (Planinsko polje, Cerkniško jezero). It grows not only on wet soil, but also on some dry karstic grasslands (especially on plateaus such as Nanos). 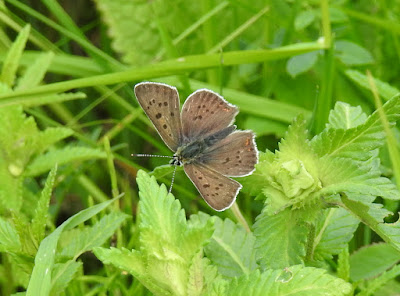 Lycaena tityrus on a wet meadow by the Nanoščica river. Butterflies are emerging in great numbers and great variety on meadows across Slovenia. We'll soon publish a more complete post on Lepidopteras... this looks a promising year for us to get to grips with butterflies! 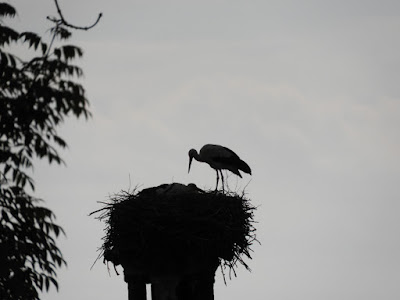 A pair of White Storks Ciconia ciconia nesting on a chimney in the village of Hrašče in the Nanoščica river basin. This is surely one of the westernmost stork's nests in Slovenia.
Posted by Domen & Sara at 13:01