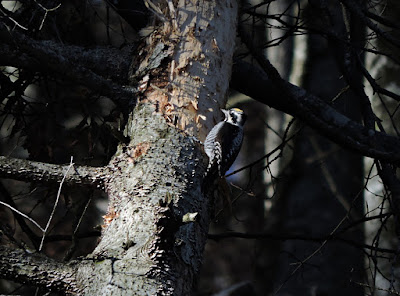 From time to time it happens to encounter a male Three-toed Woodpecker Picoides tridactylus. I don't know exactly why, but females seem to be commoner and easier to see than males. In Slovenian forests I encounter a male every 5 or so females. Moreover females also drum in spring, so even during a playback census, one is never sure to get a male, after the initial drumming response.
Encounters with Three-toed Woodpeckers are special; even more so if the bird is a beautiful yellow-capped male. This time I was at lake Cerknica, in the Notranjska region, actually looking for waterbirds on the lake. As the water levels were high, waterbirds were few and spread all over the lake. Of note was just a flock of 10 smart Goldeneye Bucephala clangula - recently arrived from the north, to overwinter on the lake. Smews Mergellus albellus should also be here anytime soon. The lack of bird activity on the lake pushed me uphill on the forested Javorniki mountains to try my luck with some forest species. The expected Ural Owl Strix uralensis didn't show up, but after a while in the forest, I heard a distinctive woodpecker "knocking". Soon I also located the source of the sound: a Three-toed Woodpecker "working" a dead silver fir Abies alba on a steep, rocky slope: video (watch HD). 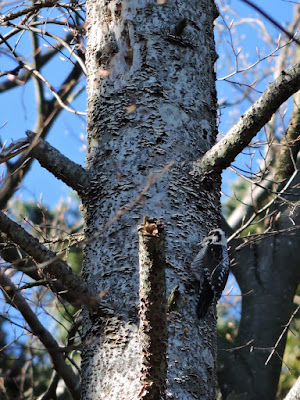 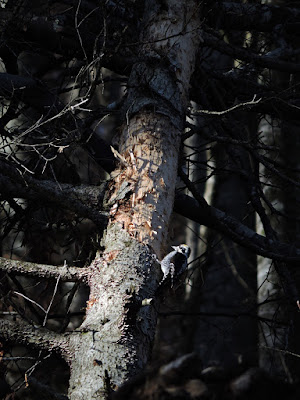 There were signs of a recent forestry cutting in the area, but I was glad to see quite a lot of dead firs left there for the woodpeckers. Several standing dead trees had the "woodpecker sign" on them - a stylized bird's head which foresters usually draw on dead conifers to signal the presence of woodpeckers inhabiting the trunk - thus such trees remain safe from cutting. A wise and clever approach! Many of the firs were also infested with beautiful polypore fungi (Fomitopsis pinicola) and had many woodpecker's holes (some certainly belonging to Three-toed).

In forests where Norway spruce Picea abies is absent, Three-toed Woodpecker also inhabits stands with silver fir Abies alba. Dinaric forests of beech Fagus sylvatica and silver fir (Abieti-Fagetum) are primarily comoposed of these two species, but Norway spruce is often found as well. The presence of the latter is in most cases the result of forestry "reintroductions" - basically most of the Norway spruces are planted. Silver fir, on the other hand, is native and so has a greater value to the local fauna: eg. Three-toed Woodpeckers in Dinaric forests depend greatly upon firs.
Posted by Domen & Sara at 06:01