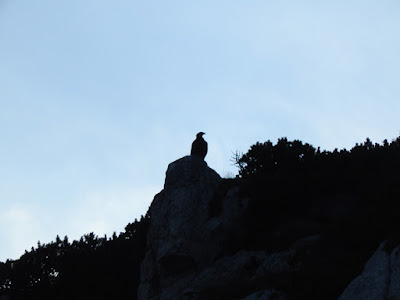 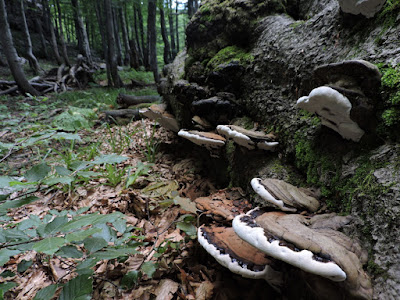 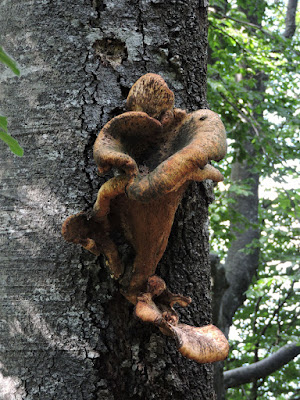 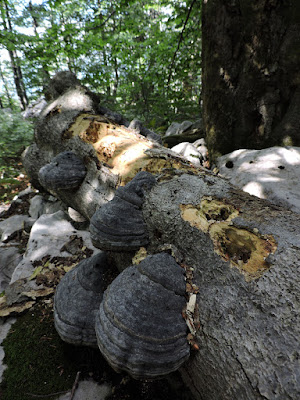 A few days ago I was on mount Snežnik (1796 m) in SW Slovenia with a couple of friends. Snežnik is the highest non-alpine peak in Slovenia, surrounded by extensive mixed forests (Abieti-Fagetum). The summit has a strong alpine influence, with many plants and birds, more usually associated with the Alps. For more info about the flora and biogeography of this mountain, see some previous posts here and here.
We first ascended Snežnik from its south-western slopes, then descended to the east and ascended again to the summit (after getting lost!). So we basically climbed on the mountain twice in a day, from two different directions. This way we discovered some rarely-visited (if at all!) parts of the forest (primeval patches), where we found an Alpine Salamander Salamandra atra, tons of dead wood & amazing fungi. On the bird front, the most interesting were a Golden Eagle Aquila chrysaetos (perched on a cliff) and several Ring Ouzels Turdus torquatus around the summit. In the thick mountain pine stand (Pinetum mugi dinaricum) some other birds were obvious: Lesser Whitethroat Sylvia curruca, Chiffchaff Phylloscopus collybita, Crossbill Loxia curvirostra & Bullfinch Pyrrhula pyrrhula. During the final, evening descend we first heard and then saw 3 different Ural Owls Strix uralensis (also singing "in concert") and heard a distant Pygmy Owl Glaucidium passerinum. The forest was full of Edible Dormice Glis glis (delivering all sorts of odd noises) that made us happy. Their numbers depend on beech mast production and consequently, a large density of dormice will support greater numbers of their main predators: owls. In these forests Ural Owl is the most typical dormouse-hunter, so in the coming months we will probably notice an increase in this species as well.
Posted by Domen & Sara at 12:55