On Friday (1st April) I visited the Kočevje forest district in southern Slovenia with the intent of catching up with one of Slovenia's rarest breeding birds - the White-backed Woodpecker Dendrocopos leucotos. I tried a good area of beech forest where last year I had one - see this post and I was rewarded once again. A beautiful male, feeding on a rotten stump, gave away its presence by calling softly a few times - it wasn't difficult to locate it. As the bird was precisely on the same spot where I saw one last year, it was most probably the same individual. The bird continued to feed calmly for a while, allowing great close-up views, down to a few meters. 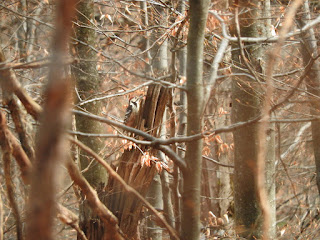 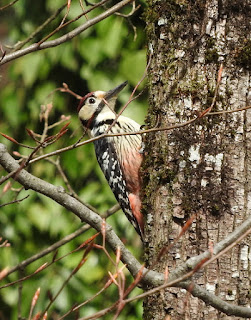 In the last pic (above), note the barred back (not white) which is the main feature of the subspecies lilfordi, inhabiting south-east Europe. The nominate subspecies leucotos has unmarked white back and is found in central and northern Europe. In Slovenia both subspecies seem to be present. There are only two data of leucotos from the alpine region (dating back to the 80's and 90's), while lilfordi is the commonest and all woodpeckers from the south of Slovenia belong to this race.
In the area where I observed the White-back, many broken trees and branches were completely "shaved" - a sign typical of this species.

The forests of Kočevje are also rich with other birds. A far commoner species than White-back is Middle Spotted Woodpecker Dendrocopos medius, which inhabits whitebeam (Carpinus), oak (Quercus) and beech (Fagus) woodlands. The bird below was found casually, close to the spot where I observed its white-backed cousin.
Later in the day I moved to conifer forests where another woodpecker specialist is to be found: Three-toed Woodpecker Picoides tridactylus. I only heard a bird drumming, so didn't take any photos, but this video collage I made recently is a good replacement (watch at 720p).
In the conifer forest two Ural Owls Strix uralensis (male and a female) were also heard. Ural is the commonest forest owl in this part of Slovenia and spring is the best time to hear one, even during the day.

Flowers were of course also in the center of my attention. One species in particular was very interesting: Scopolia carniolica - named after I.A. Scopoli (naturalist from the 18th century) that discovered this plant in today's Slovenia. This characteristic flower can be found in full bloom at the beginning of April, throughout the Dinaric forests of Slovenia, although is not very common. However, on the localities where it grows it can be really abundant. The whole plant (especially the root) is very poisonous due to the high concentrations of atropine and scopolamine in it. These venoms are present in other similar species of the same family (Solanaceae) for example in Atropa belladonna (the most similar plant to S. carniolica). Interesting is the fact that, frequently, even pollinators get intoxicated and are unable to take off from the flower or have flight problems. I noticed a few bumblebees pollinating the flowers (see pic below), but they didn't look sick after their dose of "drinking". 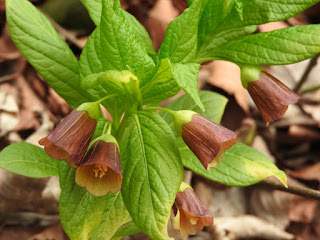 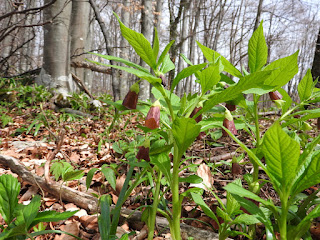 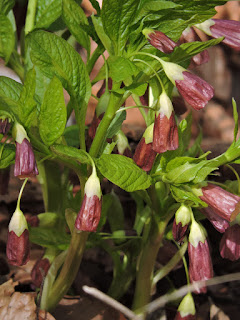 On Sunday (3rd April) I took some friends on a visit to Krakovski gozd (for more about this location see previous post) and nearby Kobile forest reserve (Gorjanci region). The latter is a complex of steep hills covered in almost pure beech stands with several forest streams. In Krakovski gozd we were delighted to hear and see the year's first Cuckoo Cuculus canorus (tits were alarming when the bird flew by - even we mistook it for a Sparrowhawk for a moment!). Quite unexpectedly we also heard and later spotted the first returning Collared Flycatcher Ficedula albicollis singing from the tallest oak's canopies. This is a very abundant bird in the Krakovo forest, but usually returns back from Africa in mid April. We also saw several of the very common Middle Spotted Woodpeckers Dendrocopos medius as well as other forest birds and even heard a Ural Owl Strix uralensis.
At the end of the day there was a last surprise: a Wildcat Felis silvestris on a forest clearing. At first we weren't so convinced it was a true Wildcat, but when we saw its back, tail and all the other features we all agreed about the identification. For more pics see Paul's photos.

Meanwhile new summer migrants are returning in numbers. In the last days I've seen Willow Warbler Phylloscopus trochilus, Common Redstart Phoenicurus phoenicurus (in the garden), Garganey Anas querquedula (more than 300 on the sea near Trieste), Moustached Warbler Acrocephalus melanopogon, Sand Martin Riparia riparia and others. However the highlight were the first two Short-toed Eagles Circaetus gallicus of the year returning to the Karst.


Very interesting to see are also our lingering winter guests on the sea, which have already moulted to summer plumage. One such bird is the Slavonian Grebe Podiceps auritus - the rarest of our grebes, which I managed to see in full breeding plumage, on the sea near Monfalcone (NE Italy).
Posted by Domen & Sara at 04:03