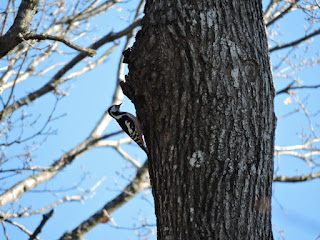 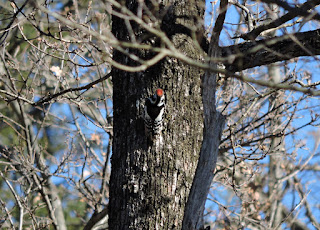 Yesterday, together with a couple of friends and colleagues from DOPPS (BirdLife Slovenia), I carried out an organised census of Middle Spotted Woodpecker Dendrocopos medius on the Slovenian Karst. We accurately investigated the wider area where I usually observe this species and tried to find new breeding areas. Using the playback method, along trasects, we counted 8 territorial Middle Spotted Woodpeckers on a relatively small area. The results show that, as expected, this species is commoner than thought in some higher parts of the Karst. It mostly inhabits hills covered with older oak stands (Quercus petraea, Q. cerris) on sunny locations. A few other trasects are to be censused in the coming weeks, so perhaps we'll add new locations to the distribution of this species.
Most of the population of Middle Spotted Woodpecker in Slovenia is concentrated in the eastern and south-eastern part of the country. It is a common species in lowland oak forests such as Krakovski gozd or the alluvial forests by the river Mura (at both sites it is a qualifying species for Natura 2000). Part of the Slovenian population also inhabits the Dinaric forests of Kočevje, where oddly there are few oak stands, on which the species greatly depends. In western Slovenia the species is rare and the population we discovered is quite localised to just a suitable area of oak forest. Perhaps in the future, with the aging of the woodlands and scrubland now covering the Karst, the species will colonise new areas of mature forest. A major threat to Middle Spotted Woodpecker is the cutting of large oak trees (usually older than 80-100 years) on which the species depends for foraging and nesting. Tree logging in some Slovenian forests have already affected populations in the east of the country. 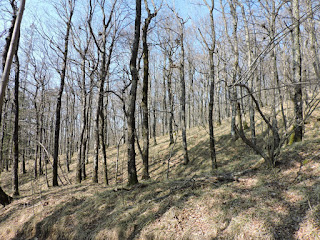