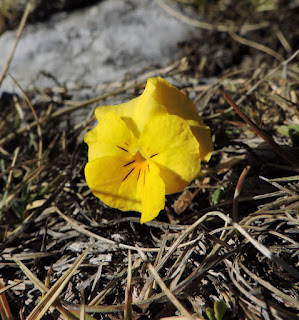 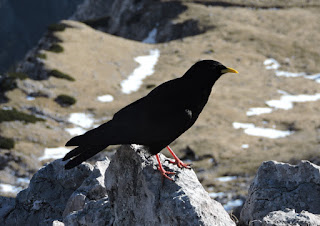 Back from two sunny days in the mountains. This time was the turn of mount Stol ("Hochstuhl" in German) which is the highest peak in the Karavanke (Karawanken) mountain range; its summit reaches 2236 metres. The mountain chain divides Slovenia (south) and Austria (north).
It was very warm for the season with very little snow on the ground. Most of the walk up to this mountain was greeted by the bloomings of Helleborus niger, Erica carnea, Primula vulgaris and Hepatica nobilis. All in flower a few months earlier than usual.
But the most unusual and unexpected find was that of some specimen of Viola zoysii in flower on Stol's summit. This plant usually blooms in summer, but most interestingly, it is a true specialty of Karavanke. It was discovered right here around 1785 by Karel Zois and later named after him. In Slovenia it is only found in the Karavanke mountains.
This taxon has an interesting distribution. In Slovenia it reaches the north-western edge of the range, whereas the rest of the global population is disjunctive in the western Balkans (Croatia, Montenegro, Bosnia, Kosovo, Macedonia, Albania). A typical and didactic example in biogeography.

The walk on Stol was also enlivened by Alpine Chamois Rupicapra rupicapra on the steep grassy slopes and a noisy flock of Alpine Chough Pyrrhocorax graculus. Down in the valley, the river Radovna produced a few Dippers Cinclus cinclus, while the lake of Trboje held a group of at least 17 Goosanders Mergus merganser and the first Goldeneyes Bucephala clangula of the season.
Posted by Domen & Sara at 05:26