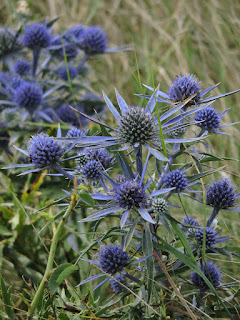 Although it's late summer and most of the grasslands are now dry and bleak, on the Karst you can still find some late-summer species of flowers which brighten up the meadows. The first four species in the selection above are all typical of this period and are fairly common on the Karst.
The beginning of autumn is also announced by the presence of a good influx of small migrants. Birds like Garden Warbler Sylvia borin, Lesser and Common Whitethroat Sylvia curruca & S. communis, Pied Flycatcher Ficedula hypoleuca, Nightingale Luscinia megarhynchos and Whinchat Saxicola rubetra are common to see these days.
Recently I was also in Trnovski gozd (Trnovo forest), precisely on its southern edge, from where most of the other photos originate.
Posted by Domen & Sara at 02:27