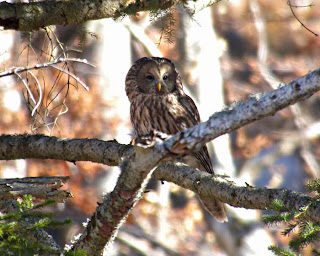 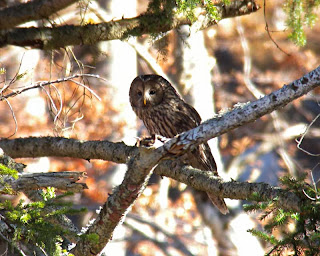 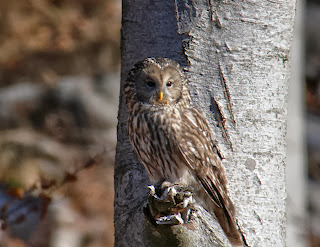 Yesterday me and a friend payed a visit to the Nanos plateau and the Trnovo forest (Trnovski gozd) in Slovenia. The weather was not the best, but we managed to avoid rain showers despite the heavy overcast skies.
First target bird of the day was the GOLDEN EAGLE which we found after about an hour's wait on the grassy slopes of Mt. Nanos (at 900 m). First two juvenile birds soared lazily above the grassy hillsides, later followed by an adult. All three birds then performed for some 15 min or more while flying one close to the other, calling at each other and sometimes landing on the top of the surrounding hills. They must've been part of a brood raised in the area. Very pleasing to see the juveniles flying around and quite an encounter I must admit.
Minutes later a Nutcracker flew along the Nanos rocky edge and landed on the top of a spruce for some seconds. My first this year. Later in the day we also heard several others around the Trnovo forest and saw about 3 different birds (all perched on spruces or in flight).
We visited the Trnovo forest mainly for the evening owl session which was very productive in the end. At dusk we managed to see two stunning URAL OWLS, still in good light, as they perched on the side branches of a spruce at the edge of a forest glade. Later we recorded at least 9 other singing (and calling) Ural Owls which raised our tally to 11 birds. All types of songs (male, female, duet) and calls were heard and up to 4 birds were singing simultaneously. All were more or less concentrated to the same area of conifer forest. Other owl species heard included both TENGMALM'S OWL (1-2) and  an unexpected Tawny Owl.
Before the owl session we had time for some birding around the forest and we thus managed to see the common species like Coal, Crested and Willow Tit, Goldcrest, Crossbill, Bullfinch, Raven, Dunnock & Wren, Song and Mistle Thrush and others. We were also quite lucky to see another GOLDEN EAGLE soaring above Lokavec, in front of the cliffs of the Trnovo's edge - an area where a pair breeds. So this was our 4th Golden Eagle of the day!
Mammals at night included Roe and Red Deer (rutting), Fox, Brown Hare and Edible Dormouse.
As I took no bird pics at all I uploaded some old Ural Owl shots from 2009 (above) - photographed in complete daylight in Trnovski gozd.

Škocjanski zatok NR: just a quick update from Wednesday when I saw 7 GLOSSY IBISES in the freshwater marsh, along with the White Stork which is still present and a female Marsh Harrier.
Posted by Domen & Sara at 08:41