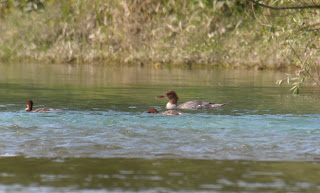 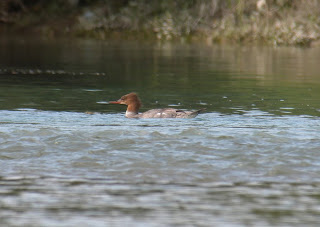 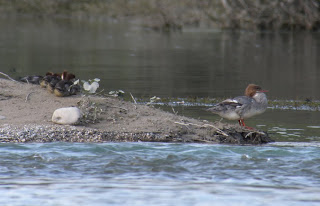 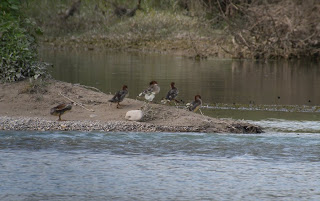 Yesterday afternoon I spent a few hours with a couple of friends on the Isonzo river. We had great views on some Goosanders - initially a female with 6 juveniles, later also 3 other adult females appeared. The family showed well when the juveniles came out of water to rest and preen on the shore (see above). A short video can be seen here. Nearby we visited a small colony of Bee-eaters nesting on sand bank just meters away from the nearest village. Several birds were flying around and some were entering the nest-holes.
In the area we also saw 2 Hobbies, 1 Honey Buzzard and a Kingfisher.
Earlier in the afternoon we made a quick visit to Isola della Cona NR which held more or less the same species as last Sunday. Nice to see were 2 Glossy Ibises (insead of one) and bigger numbers of Curlew Sandpipers, among +10 Little Stints, Wood, Green and Common Sand, 1 Black-tailed Godwit, lots of Spotted Redshanks ect.
A Squacco Heron also showing well, along with a fly-by Purple Heron, 2 Hobbies and +30 Med Gulls.
Posted by Domen & Sara at 03:17