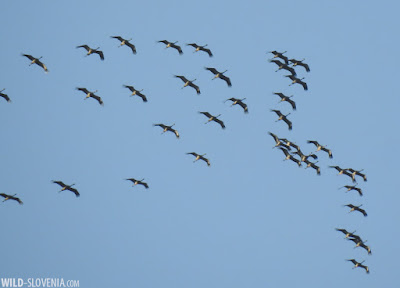 It's that time of year again. The past couple of days have seen an impressive eastward migration of Cranes Grus grus over Slovenia. Large flocks of up to 1000 birds entered Slovenia in the west, from the plains of NE Italy, and flowed above the Karst, Vipava valley and the Notranjska region, heading eastwards in the general direction of Hungary. We didn't need to go far to see them - on Saturday (27th Feb) several flocks passed low above our home. The steady northeasterly burja was making migration difficult for the Cranes, which were keeping rather low and were therefore easily visible (and audible). A morning flock of around 130 greeted us when we woke up and walked out of the door, while another one numbering 63 birds said goodbye in the evening (pics below). Other observers to the north of where we live were even luckier with flocks of 200, 400 or even more, while in the Notranjska and over the Ljubljana region single observers counted totals of up to 3000 birds! 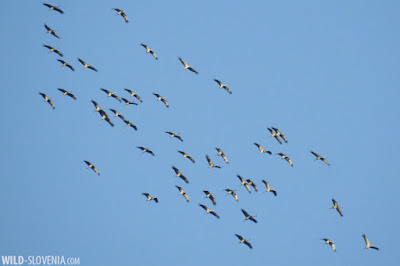 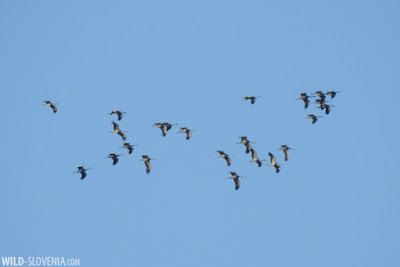 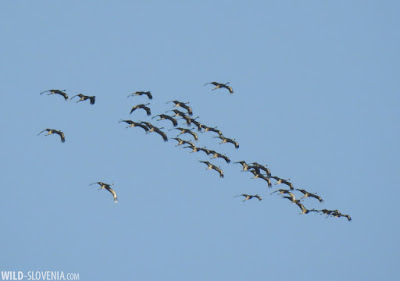 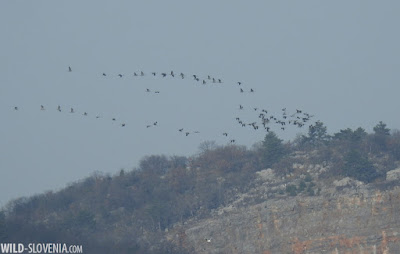 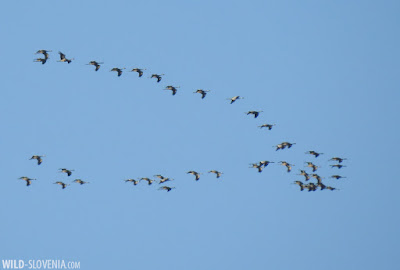 The Crane spectacle is getting bigger and bigger every year and an increasing number of people is reporting migrating flocks from all around the country. Sophisticated smartphones and social media in the hands of "ordinary people" surely help a lot in the recording of sightings. At the moment the provisionary tally for Slovenia, according to Dejan Bordjan (who collects all the data about Crane migration in the country) stands at around 30.000 Cranes. But the next days, as stable weather conditions continue, might bring more. Keep your eyes to the skies!

Those of you who would like to delve into the subject should really read this blog by Paul, which analyzes the steep increase in Crane numbers over the last decades in NE Italy (and consequently Slovenia/N Adriatic).

Good spring migration to you all!