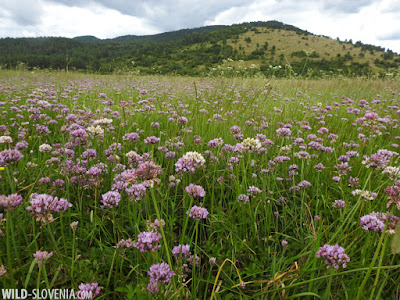 Last weekend we visited the area of the Pivka seasonal lakes, a complex of 17 temporary lakes situated south of Postojna, near Pivka. Like all karstic lakes they are dry in summer and only fill with water during spring and autumn rainfalls. Therefore in this season the lakes are actually beautiful wet meadows hosting amazing displays of wildflowers. We visited the second largest lake in the group, Petelinjsko jezero (Petelinje lake) where blooming Mouse Garlic Allium angulosum was covering the lake bottom. This particular species of leek is rather scarce in Slovenia and usually found on wet meadows in the lowlands, however where present, it can cover entire fields. Another interesting plant, perhaps the most typical of the Pivka lakes is the Solitary Clematis Clematis integrifolia. This upright-growing clematis is rare in Slovenia and most of its population is found right here. The wet meadows were also dotted with the occasional Marsh Gentian Gentiana pneumonanthe, the larval feeding plant of the Alcon Blue Phengaris alcon. On the higher grounds around the lakes the soil is very stony and thus supports the usual mixture of limestone grassland plants like Amethyst Eryngo Eryngium amethystinum, Rock Knapweed Centaurea rupestris and many other typical karstic species. 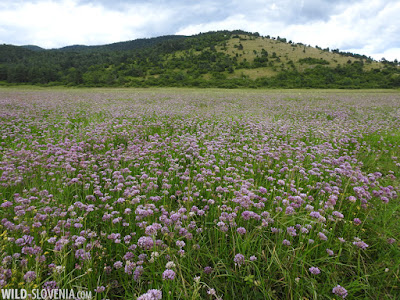 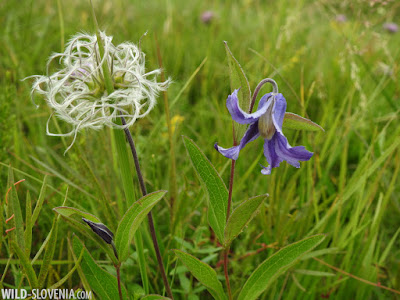 A summer visit to the area will reveal few interesting birds, except for the common species of open areas like Red-backed Shrike Lanius collurio, Yellowhammer Emberiza citrinella, Cirl Bunting Emberiza cirlus and others. However a spring visit, ideally in May, is well worth because of the high densities of Barred Warblers Sylvia nisoria inhabiting the scrubby areas around the lakes. During our short visit we saw several noisy families of Red-backed Shrikes and also watched a White Stork Ciconia ciconia preying on what looked like a large Slow-worm Anguis fragilis, in a meadow by the roadside. Among the few butterflies present, the most interesting was the Ringlet Aphantopus hyperantus. The same day we also visited the Nanoščica river basin, where the highlight was a fleeting Scarce Large Blue Phengaris teleius, whose larvae feed on the Great Burnet Sanguisorba officinalis. 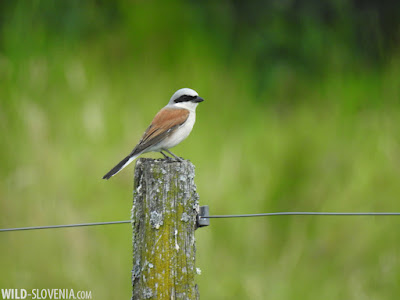 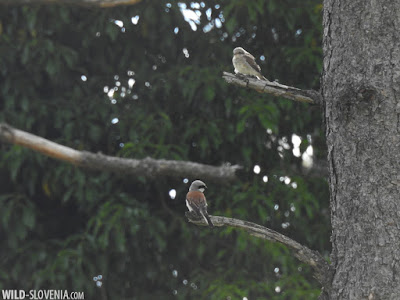 Moving to another area, but remaining in our beloved Karst, recently we also visited the Škocjan caves (Škocjanske jame). We only checked the external part of the caves, around the Velika dolina (sinkhole), where clouds of noisy Alpine Swifts Apus melba were the main protagonists. Among them were also some of the local Crag Martins Ptyonoprogne rupestris, while on the rocky slopes we observed a singing male Rock Bunting Emberiza cia, a common bird in the Karst. High in the sky near Divača we also spotted a Short-toed Eagle Circaetus gallicus. All in all a typical selection of karstic birds. 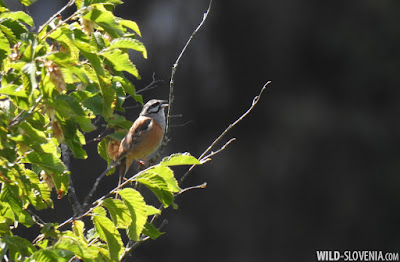 On the slopes inside the Velika dolina sinkhole we also spotted an interesting butterfly typical of dry sunny limestone slopes, the Chequered Blue Scolitantides orion. Among plants there were several interesting species including nice groups of blooming Grecian Foxgloves Digitalis laevigata (a common species here, but overall rare in Slovenia), Pyramidal Bellflowers Campanula pyramidalis and the interesting Ivy Broomrape Orobanche hederae (a very rare species in Slovenia with its typical locality being Škocjanske jame). The first Black False Helleborines Veratrum nigrum were just coming into bloom and already attracting some butterflies. As opposed to the White False Helleborine V. album, which loves wet meadows and mountains, its black cousin is found on dry slopes and light woodland.
Posted by Domen & Sara at 09:17