Nanos... up where we belong 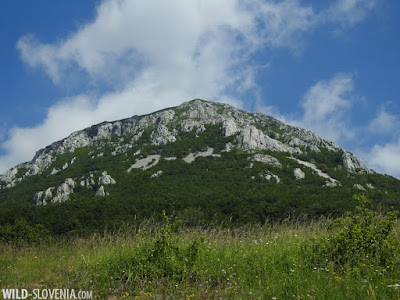 Mount Nanos with its 1242 metres above sea level is the most distinctive mountain of the Primorska region. Nanos is actually a karstic plateau, extending between Razdrto and Vipava and acting as a biogeographical border between the sub-Mediterranean Primorska and the continental Notranjska regions. Although the highest part of the plateau is the forested summit called Suhi vrh (1313 m), the most well-known and popular hiking destination is the grassy Pleša (1242 m). We like to visit Nanos throughout the year, but the traditional late-spring hike to Pleša is actually the most rewarding in terms of wildlife and scenery. Last weekend we ascended the mountain from Razdrto by taking the most scenic path through the different vegetational belts: from lowland hay meadows, oak & thermophilous woodland, rocky slopes with screes and mountain pastures on the top.

Passing through the initial thermophilous woodland and reaching the first limestone scree we immediately spotted a young Alpine Chamois Rupicapra rupicapra on top of a rock. Nanos holds a good population of these ungulates that can be observed relatively easily when scanning the large screes and rocky slopes, especially early in the morning. Circling in the sky above the Chamois was also a Peregrine Falco peregrinus, a species we frequently observe in this area and which probably breeds on the cliffs. Crag Martin Ptyonoprogne rupestris is another bird of this habitat, although mostly breeding down in the valley around Razdrto.


Continuing our way through the upper tree limit, the view over the higher part of the Vipava valley opened. As soon as we looked down towards Razdrto, a large black silhouette gliding in the sky beneath us caught our attention: it was a Black Stork Ciconia nigra! As it was heading straight down towards the Vipava valley, we were quite sure to assume that it was our well-known Black Stork nesting somewhere in the valley. 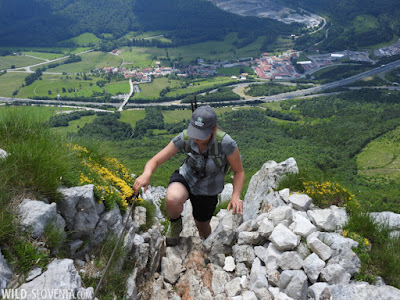 Our favourite animal living in the rocky world above the tree line is the Rock Thrush Monticola saxatilis. Despite the quite strong westerly wind blowing right into the rocky slope, we managed to find a singing male in a sheltered spot, not far from the place we used to observe it in the past years. On Nanos there's plenty of habitat for this shy mountain species, however breeding pairs are scattered around quite scarcely. Lower down on thermophilous cliffs the odd Blue Rock Thrush Monticola solitarius also shares a similar habitat and sometimes "interacts" with its more colourful cousin. Among other birds of the rocky slopes were also several Tree Pipits Anthus trivialis and a family of Rock Buntings Emberiza cia. 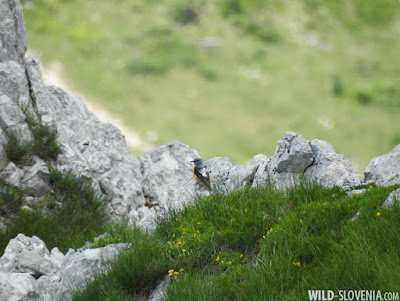 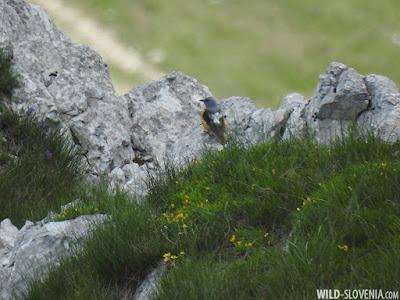 Upon reaching the grassy summit we were greeted by the endemic Kojnik's Iris Iris sibirica ssp. erirrhiza (growing only on mountain pastures of the High Karst of Slovenia and Croatia), as well as blooming White False Helleborine Veratrum album and several other species of mountain pastures and forest. The northern part of Nanos' summit is dominated by Dinaric beech forests, where amazingly, Ramsons Allium ursinum was still in bloom. In the shadier meadows on the edge of the forest several Clouded Apollos Parnassius mnemosyne were putting on a good show. Among other butterflies a special mention goes to the rare Geranium Argus Aricia eumedon, (LFP=Geranium sanguineum) which can be observed relatively easily on Nanos. 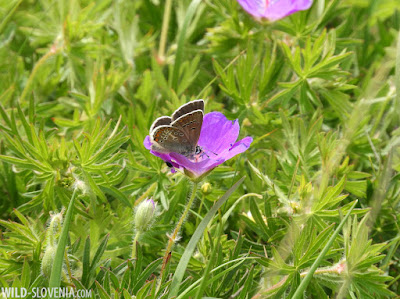 The sloping mountain meadows to the north and west of Nanos' summit are the favoured hunting area of a pair of Golden Eagles Aquila chrysaetos. While slowly descending towards Sv. Hieronim it's always worth checking the sky for any larger raptors, as also Griffon Vultures Gyps fulvus occur regularly. With a bit of patience and scanning we were able to spot the pair of eagles circling the sky.
The extensive meadows were also a botanical spectacle with late-spring orchids, Asphodels, irises, lilies and several other interesting species of plants like the Carniolan Vetch Astragalus carniolicus, an Illyrian endemic with its locus classicus on Nanos. Several other Carniolan Lilies Lilium carniolicum were in flower, although most will do so at the end of June. It was interesting to note that almost every lily had a Scarlet Lily Beetle Lilioceris lilii munching its flowers. Among invertebrates the distinctive jumping spider Philaeus chrysops was common on the limestone rocks. 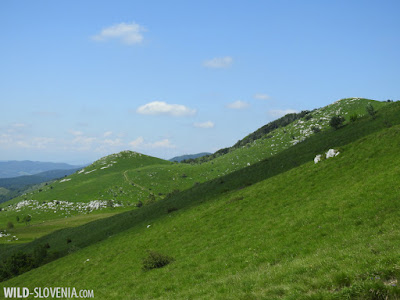 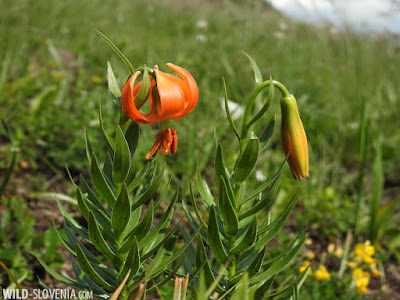 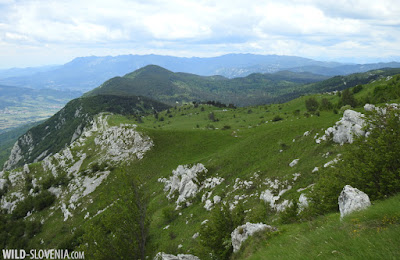