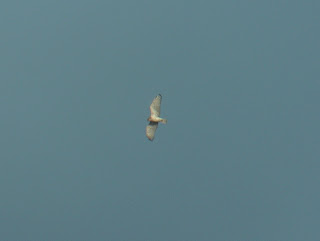 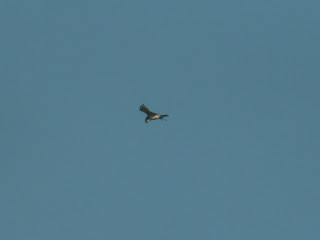 This afternoon I was driving on the Slovenian motorway near Sežana, while a SHORT-TOED EAGLE had the brilliant idea to appear above my car, right when I was overtaking a truck. Great timing! Later in the afternoon near Škocjanske jame I saw another Short-toed Eagle hanging in mid-air, almost motionless above the hills. Most probably the same individual was also seen later a few kilometres away near Divača. So at least 2 different individuals. The above pics were taken at Divača's airfield where the bird was hunting over the grassland; note the typical dangling massive head.
Other birds seen briefly also included a few Alpine Swifts, 4 Ravens 2 Stonechats and 2 Honey Buzzards.

Local patch: this morning I also had two Honey Buzzards soaring above the patch, together with a Common Buzzard. A few migrant Swallows have appeared in the last few days and also some migrant Common Swifts are seen on a daily basis (the local breeding birds are long gone now). A whistling Nightingale from the nearby woodland was also of note today (as it was clearly a migrant). Green and Great Spotted Woodpecker on a daily basis in the garden. The Alpine Swifts around Monte Grisa are always there in their usual numbers. Otherwise it's all pretty quiet in the patch at the moment, but soon migration will pick up...

Škocjanski zatok NR: earlier this week I was on site for the weekly monitoring, but the situation was quite calm. A juvenile Black Tern (still in the lagoon) and a male Little Bittern were the most notable birds.
Posted by Domen & Sara at 13:39