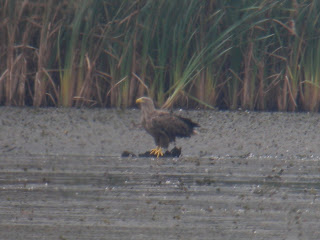 Today I had some good birding under overcast skies with a couple of Slovene friends. We visited the Medvedce reservoir area (Pragersko) in north-eastern Slovenia. The reservoir was full of water and thus full of birds. Huge numbers of Coots (up to 4000) and wildfowl gathered there, including something like 50 Ferruginous Ducks and all the other commoner ducks (incl. Pochards, Tufted Ducks, Garganeys..). Also large numbers of Great Crested and Little Grebes, Grey and Great Egrets and so on.
All this large movement of birds attracts one or two WHITE-TAILED EAGLES a day - we had two adults perched in the middle of the reservoir (see pic), giving excellent views, also when flying overhead.
A BITTERN walking on some floating vegetation was another highlight, with a female/imm Little Bittern flying nearby almost at the same time. Also smaller numbers of Purple Herons in the area (usually juveniles).
The third coolest birds in my opinion were STOCK DOVES which we saw in different areas during the day. I'm usually not used to see this birds out of the winter season, so it was nice to had them around.
In the area also plenty of other good birds which included: Common and Wood Sandpipers, 3 Lesser Whitethroats, huge mixed flocks of Greenfinch, Linnet & Tree Sparrow, several Ravens, 2 Red-backed Shrikes, a few Stonechats with a couple of migrating Whinchats, 1 Wryneck showing well on a pole, several Willow Warblers, 1 Garden Warbler, Tree Pipits passing overhead, 2 Common Whitethroats, Yellowhammer, 5-6 Marsh Harriers, 10 Greenshanks, 3 Water Rails (also seen), 1 Hobby (flying and perched in a field), 2 Sedge Warblers (firsts of the autumn), a few Snipes, Ruff, something like 5 Dunlins and 2 Little Stints, flock of 13 Black-tailed Godwits, 1 Turtle Dove, 1 juvenile Peregrine (sitting in a field), 10 Curlews, 2 Black-necked Grebes.
Later we moved to the Ormož lake where a mixed group of juvenile LITTLE GULLS and Black Terns was fishing over the water's surface. Here another stunning adult WHITE-TAILED EAGLE was found resting on a muddy island in the middle of the lake. In the surrounding trees also the nice mix of common canopy migrants like Wood Warblers, Spotted and Pied Flycatchers, 1 Chiffchaff and a Nightingale.
A fly-by Cuckoo at the end of the day was seen from the car.
Local patch: yesterday in the evening I had a quick check with the scope which produced 2 PIED FLYCATCHERS at the edge of the deciduous woodland, sitting on a dead tree and catching insects. A good species to score from home!
Posted by Domen & Sara at 11:55