Cranes and a taste of winter 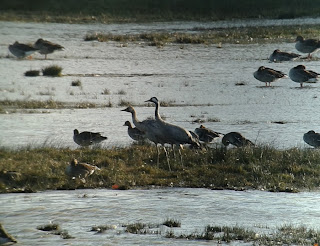 First day of December and it feels just like deep winter. Today was sunny and very windy with low temperatures. I made one of my usual seasonal trips around the coast to see some first-of-the-season species or new winter arrivals.
I started at Lisert scanning the sea, which held two Red-throated Divers, a Red-necked Grebe and lots of Black-necked and Great Crested Grebes.
Then was the turn of Valle Cavanata NR, with particular attention to the Averto canal which produced the most interesting birds here: among a large group of Pochards, 4 SCAUPS (3 f & 1 m) and 2 female GOLDENEYES were present, along with 4 Tufted Ducks. The beach held a mixed flock of +50 Curlews, +60 Dunlins and some Grey Plovers. The freshwater marsh instead was full of wildfowl - with hundreds of Teals, Pintails, Shovelers and Gadwalls. A Marsh Harrier passing by kept the Teals in the air all the time. In the fields not far from the reserve I also saw the season's first Common Gulls among large flocks of Yellow-legs.
In the afternoon I went to Isola della Cona NR which produced today's main highlight: two COMMON CRANES (an adult and a juv.) feeding in the freshwater marsh. After a few hours they both took off and headed SW.
The reserve was full of geese which were mainly Greylags and White-fronted Geese (up to 300). Among them I managed to spot 2 TUNDRA BEAN GEESE which were reported a few days ago. Most other birds here were ducks of almost all dabbling species, plus a few Goldeneyes and Red-breasted Mergansers on the Quarantia canal. The latter also held two more Red-throated Divers.
The day was rounded up with two Water Rails feeding on the exposed mud at low tide.
Posted by Domen & Sara at 08:26