A Long-tailed Duck in the fog 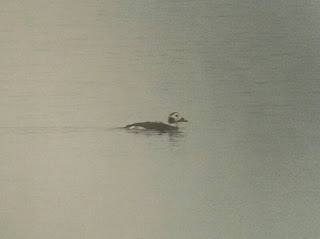 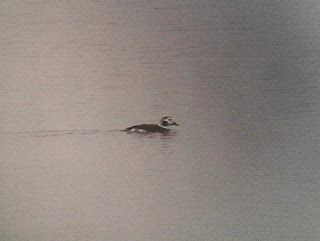 Despite the lack of a proper winter weather, it's feeling pretty northern-ish at the moment. After the small influx of Snow Buntings all over Friuli Venezia Giulia and Slovenia, now it's the turn of Long-tailed Ducks. One of them (a female) was found a few days ago on the Quarantia canal in the Foce Isonzo/Isola della Cona nature reserve.
Despite having seen 3 already two weeks ago, today I braved the thick fog and went to look for it. It took me about an hour and a half (and a nice walk in the 100% humidity) to find it. The LONG-TAILED DUCK was swimming peacefully on the lower stretch of the canal in the company of Black-necked Grebes. This was a nice winter plumaged female and a totally different bird from those seen on the Cerknica lake. In between its frequent dives I managed to take a couple of phone-scoped shots in the thick fog (above).
The area held the usual species to be espected at this time of year, including a few Goldeneyes (several also on the Isonzo river), Red-breasted Mergansers, common grebe species and waders in the form of Dunlin (+1000), Curlew & Grey Plover. Perhaps the most interesting birds were a Great Grey Shrike, a Peregrine hunting above Quarantia's estuary, a few Firecrests and Goldcrests, 1 Green Sandpiper and 7 Common Gulls on the mudflats. A flock of about 300 White-fronted Geese (and Greylags) was feeding on the fields at the entrance of Isola della Cona.
A brief visit to Valle Cavanata NR with a nice low tide, revealed a lost GOLDEN PLOVER among 100 Lapwings, a few Common Redshanks and an awful lot of wildfowl.