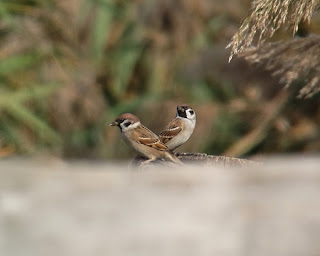 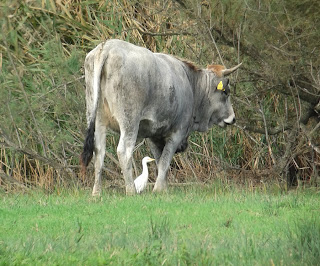 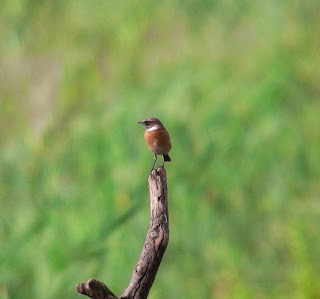 Škocjanski zatok NR: back at the reserve today after several weeks of absence. In the meantime I missed some Bearded Tits and a few other seasonal birds. All in all I had an enjoyable morning, but with nothing too special to report. Wildfowl numbers are building up but probably involve migrants as well: 546 Teals, 10 Wigeons, 167 Shovelers and a lot of Mallards. Coots today numbered 647 individuals. A Black-necked Grebe is now regular in the lagoon along with several of the wintering Great Crested and Little Grebes. Three Cattle Egrets in the freshwater marsh were a pleasant surprise, though they usually appear annually at this time of year. A female Marsh Harrier provided some interest while hunting over the marsh and spreading panic among the Teals. Waders in the brackish lagoon included the usual numbers of Greenshank (22) and Curlew (a few) plus some Dunlins (about 4) and a Spotted Redshank. A solitary Lapwing was in the freshwater marsh. Passerines included at least 7 Stonechats, 2 Water Pipits, 6 Reed Buntings, Chiffchaffs and usual numbers of Cetti's Warbler and a small flock of Tree Sparrows. Also quite a lot of Black Redstarts around in this period.

Local patch: yesterday's highlight was a female HEN HARRIER migrating high above the house, heading towards the Karstic edge and disappearing over the pines. A good local record and a patch year tick by the way. Other sightings from the past few days included: Woodpigeon (70 in flock overhead), Siskin & Linnet (small flocks on migration), Chiffchaff (daily in the garden), Song Thrush (2-3), Water Pipit (passage), Black Redstart, Dunnock, Sparrowhawk, Blackcap ect. Still an awful lot of Jays around - the essence of autumn. I also started to feed the birds in the garden again and the first birds that appeared at the feeders were Great and Blue Tits.