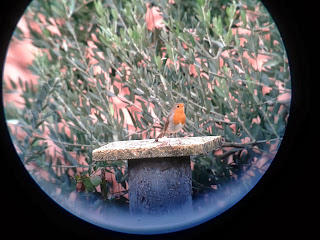 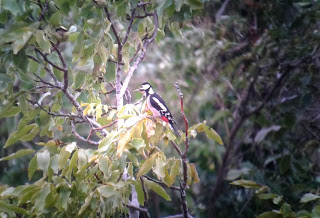 Local patch: Sunday was a good day for vis migging as the skies were clear and I saw a good selection of scarce local species. The highlight were 3 PALLID SWIFTS which represented the 3rd record of the species in the patch. They passed by in steady flight, heading towards Trieste. One of the three (or perhaps a fourth bird) was seen circling overhead several times and in good light. As for the Pallids in Trieste, breeding has been confirmed in the last few days and small numbers are regularly seen in the town centre - around the colonies.
Here are some other numbers from Sunday's patch's birding from the house: Swallow (4 - probably the last few this year), Jackdaw (1), Woodpigeon (+70), Cormorant (6 over the ridge), Linnet (6), Song Thrush (2-3 now daily in the gardens), Dunnock (a few), Chiffchaff (daily 1-2 birds in the garden), Serin (1), Grey Wagtail (2), Sparrowhawk & Buzzard. Also saw the first Black Redstart in a while, the first Great and Blue Tits at the sunflower feeders, Robins everywhere, Jays infestant and increasing Starling numbers.
Water Pipits are also regularly heard, both in the patch and in the town of Koper or Trieste as they fly overhead.