Last migrants in the garden

Local patch: I'm having a good couple of days here in and around the garden as the low clouds, mist and rain are keeping some late migrants grounded. The most notable was a Common Redstart, this time a male, as opposed to the female I had some days ago. A Garden Warbler is now regularly seen feasting on the figs and elder bushes along with up to 3-4 Blackcaps. A single Chiffchaff and 2 Willow Warblers are also regularly heard.
Jays are now one of the commonest birds to be seen around the countryside and here in the gardens they are usually seen carrying a walnut or acorn in the beak. Male and female Great Spotted Woodpecker are showing well on the walnut tree as they come here to feed on the seeds (below) although Green Woodpeckers are more shy (as usual).
A flock of Swallows (+30) with some House Martins was also present in the last two days and many other Swallows (more than 50) were seen migrating past yesterday. These are probably the last hirundines I see this year...
Other birds of note yesterday included an impressive flock of 600-800 Woodpigeons flying far above the gulf (the firsts of the season), 2 Jackdaws flying over the house (patch year ticks!) and a Song Thrush in the garden (also a season's first here). Robin numbers continue to increase, along with Blue and Long-tailed Tits and the odd Grey Wagtail is still seen passing over the suburb on a daily basis.
A Sparrowhawk today was the first in a while and in the morning I also heard a fly-by Serin. 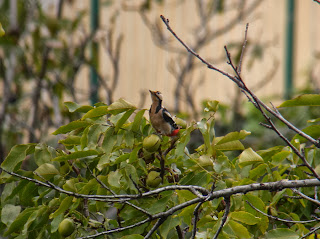