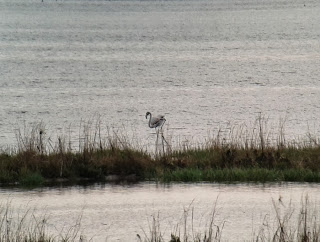 This afternoon I failed to see the 145 Flamingos reported yesterday at Valle Cavanata, but managed to see a single adult FLAMINGO in the nearby lagoon of Grado (phone-scoped above). The species is an regular, but still rare visitor in the region and at the moment there are several hundreds present in the wider lagoon complex. It was nice to see an adult after so many juveniles I used to see in the past years at Valle Cavanata (the classic place to see the species in winter).
Grado's lagoon held also good numbers of waders with 7 BAR-TAILED GODWITS being on top of the list. Also lots of Grey Plovers, Dunlins (+200), Lapwings, Curlews (+100) and other common waterbirds. Water Rails are beginning to be more prominent at this time of year, as they are usually heard calling in the reedbeds. The lagoon's large water bodies are already holding an awful lot of Great Crested Grebes and a few Black-necked Grebes as well. A GREAT GREY SHRIKE at Bosco San Marco near Aquileia was also of note.

Local patch: this morning the local weather conditions seemed good for seawatching, but a short session at Miramare didn't reveal any shearwaters or true seabirds. Instead I was very pleased to find the season's first RED-NECKED GREBE swimming close o shore. The sea held also a few Med Gulls and a Sandwich Tern
Posted by Domen & Sara at 12:29