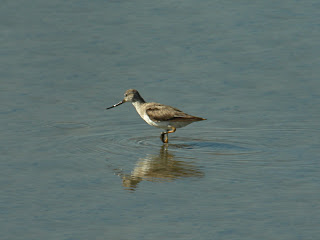 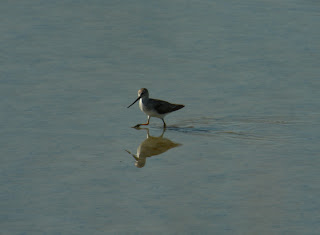 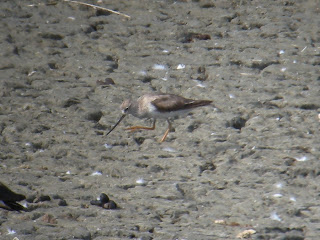 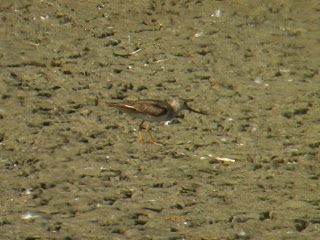 Another twitch brought me to Valle Canal Novo in Marano Lagunare today, this time for a much sought-after wader: Terek Sandpiper. At first it was quite difficult to find it among the hundreds other waders scattered all over the marsh, but with joined forces of two fellow twitchers who arrived on site, we soon had the TEREK SANDPIPER in our scopes. It then allowed quite good views (sometimes very close to the hide we were standing in) for the rest of the afternoon - that was about 2 and a half hours. I only managed a few shots for documentation (above). Terek Sand, being a WP tick, rises my list to 390 species (according to Netfugl). Now just 10 more till the 400 barrier!
The situation in the marsh was otherwise far from boring as waders kept us well entertained. The scrape was literally covered with Snipes (+200), Curlew Sandpipers (100), Lapwings, Spotted Redshanks, Grey Plovers (+50), Ruffs (+50), Wood Sandpipers, Little Stints (+30) and smaller numbers of Greenshank, Black-winged Stilt, Little Ringed Plover, Redshank, Black-tailed Godwit, Green & Common Sandpiper, Ringed Plover, Dunlin and Curlews. Of the most interesting species a BROAD-BILLED SANDPIPER was the major attraction after the Terek (probably one of the 9 birds reported here a few weeks ago). I still didn't see it this year, so it was quite nice to catch up with this annual rare. A single KNOT, a quite unseasonal GOLDEN PLOVER and 2 Avocets were also among the highlights.
A large flock of Teals held also good numbers of Garganeys (+20) among them and Spoonbill, Purple Heron, Common Tern, Fan-tailed Warbler, Yellow Wagtail were also seen. The hedges held several Garden Warblers, a few Pied Flycatchers and a Red-backed Shrike which all added a good taste of autumn to the afternoon.
Posted by Domen & Sara at 12:15