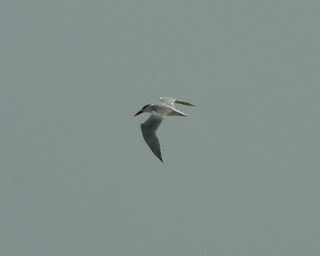 Today I spent most of my time birding with a friend around Isola della Cona, Lisert, Valle Cavanata and the Duino/Devin cliffs. A quick stop at the cliffs, early morning, produced two smart Blue Rock Thrush males, a flock of screaming Alpine Swifts and about 20 Common Eiders on the sea - some males already sporting the breeding plumage (later seen quite closely from Duino's quay). Also some Sandwich Terns were of note.
A quick check of the RED-RUMPED SWALLOW site at Lisert revealed 2 adult birds flying low above our heads.
At Isola della Cona NR an unexpected surprise in the form of CASPIAN TERN was the major highlight of the day. The bird was only seen in flight as it passed low above the main hide, heading W towards the Isonzo river. Unfortunately it was only seen briefly and we couldn't find it again later. However I was very pleased to see a Caspian Tern after so long - my last one being in Egypt back in 2009 (pictured above).
The freshwater marsh at Isola della Cona held a good variety of waders and wildfowl, which were all flushed when a Peregrine passed through. The most interesting birds here included: Dunlin (+10), Curlew Sandpiper (+10), Little Stint (3), Black-tailed Godwit (2), Ruff (6), Green and Common Sandpiper, Spotted and Common Redshank, Snipe, Little Ringed Plover, Curlew, Lapwing, Med Gull (20), Bee-eater (+20), Marsh Harrier (1), Common Redstart (1 female), Spotted Flycatcher (1), Whinchat, Fan-tailed Warbler (2 at Caneo), Reed Warbler and all common dabbling ducks (most still in eclipse plumage). A brief visit to Valle Cavanata NR added to the list a Grey Plover in the main reservoir, plus a Pied Flycatcher and a Willow Warbler sharing the same tree.

On Sunday I had a guided walk in the Glinščica valley (Val Rosandra) on the outskirts of Trieste, but it was a more general - naturalistic one. However I managed to see a couple of migrant Wheatears on MT. Stena, a few Willow Warblers and some Crested Tits in the pine woodland. Kingfisher and Grey Wagtail were also two good finds along the Glinščica stream.
Posted by Domen & Sara at 08:30