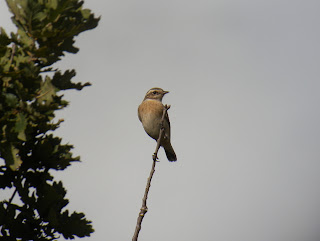 Local patch: an interesting day beginning in the morning with overcast skies and a stiff northeasterly. After midday the sky cleared and it started to look promising for vis migging. Indeed in the early afternoon I managed to spot a few interesting birds from the house. The first was a female Honey Buzzard, very high up in the sky, migrating southwards. Minutes later a Tree Pipit called overhead and then I found a Whinchat (juv) in the garden, quickly followed by a female Marsh Harrier above the ridge, heading southeast. So I decided to head for the cliffs and have some vis migging there. At first it was quite calm, but then, late in the afternoon a flock of +25 House Martins, 10 Swallows and +10 Alpine Swifts suddenly appeared in the sky. Mixed among them was also a Common Swift. A Grey Heron migrating, again very high up overhead, was also of note. While walking back my usual woodland path a BLACK WOODPECKER called from the pine woodland - patch year tick!  One or two Rock Buntings were also seen along the limestone cliffs, but were pretty shy today.
Yesterday in between rain showers and strong northeasterly wind a total of 67 House Martins passed the patch, divided in smaller flocks, while the season's first Sandwich Tern was seen flying along the coast.
Posted by Domen & Sara at 10:24