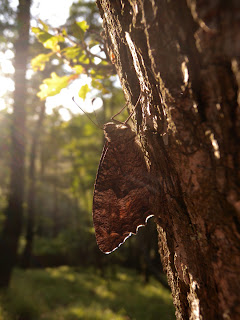 Local patch: this afternoon I had a walk in the woodland and nearby grassy limestone slopes. The main target was to find some migrants to add to the patch year list. I was quite successful as I found both Spotted (2) and Pied Flycatcher (4) and a Garden Warbler. The flycatchers were of course doing what their name says - catching flies at the edge of the woodland. The Garden Warbler instead was lured out of the bushes (fig trees actually) with pishing. A male Golden Oriole was also quite nice to see flying around. Other birds were mainly the common woodland ones including: Great Spotted & Green Woodpecker, Marsh, Blue and Crested Tit, Nuthatch, Short-toed Treecreeper, Robin, Nightingale, Rock Bunting (family party on the limestone grassland), Raven, Common Buzzard. The usual welcome selection of birdlife to be found in the patch.
Interesting to note that the commonest animal in the oak woodland was the Woodland Grayling (Hipparchia fagi) - above.
At the end of my walk I had an unexpected surprise. While I was walking on the steep limestone and grassy slope, I flushed a Nightjar which flew off and gave good flight views, before landing back on the ground. Now I must say that in this same area I saw more Nightjars by day than anywhere else. All involved casual encounters of birds flushed from the ground (daytime roost). Finding a nest though, requires Jedi skills!
Earlier this morning I also saw 4 Honey Buzzards soaring above the karstic edge.
The season is quite late for wildflowers and plants, but a few were still to be found. Some of the more obvious and typical for the area included: Chrysopogon gryllus & Stipa eriocaulis (grasses), Dianthus monspessulanus, Pistacia terebinthus, Paliurus spina-christii, Dictamnus albus, Satureja sp., Eringium amethystinum, Campanula pyramidalis and the more widespread stuff like Centaure jacea, Betonica officinalis and Anthericum ramosum.