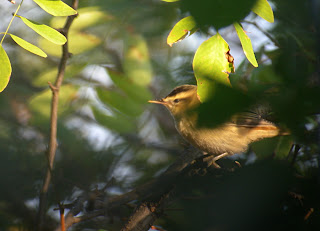 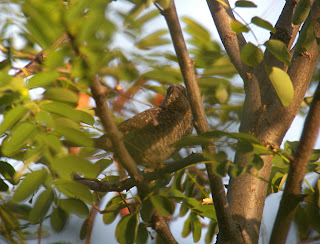 Škocjanski zatok NR: I was on site early this morning at around 6 am and for the first time in a while the hedges were again alive with birds. Not the ordinary, local birds though, but migrants! While pishing out some warblers from the bushes I managed to attract a nice Wryneck (2nd pic) and minutes later a Sedge Warbler (1st pic). There were also lots of Great Reed and Reed Warblers, along with 2 showy Nightingales. The freshwater marsh held the usual array of common waterbirds plus two eclipse male Garganeys along with increasing numbers of Teal (18 counted). Three Night Herons, 2 Snipes and 14 Wood Sandpipers were also of note there.
Today the lagoon held not one, but 2 juvenile Black Terns and 4 Pochards. Otherwise more or less the same old things, with birds like Redshank, Greenshank, Curlew, LRP and so on.

Local patch: had a Chiffchaff in the garden the other day - an increasingly scarce species in the area.
Posted by Domen & Sara at 04:50